Hide Search
You are here: Home / Jesus Through all of Life / #13 Jesus and War
Reading Time: 4 minutes

The biblical laws concerning warfare are given in Deuteronomy 20. The primary and ordinary function of war is the establishment and increase of righteousness in the land. Possession, like inheritance, is a visible aspect of dominion and so, one of the gospel promises of the Father to the Son in Psalm 2 is, “I will make the ends of the earth Thy possession.”.

As believers, the bible is to guide our understanding of warfare through the laws given by God.

First, wars are essentially religious and call for trust in the presence of whatever deity you claim to worship.

When you go out to war against your enemies… you shall not be afraid of them, for the Lord your God is with you. …when you draw near to the battle, the priest shall come forward and speak to the people and shall say to them … let not your heart faint.

Do not fear or panic or be in dread of them, for the Lord your God is he who goes with you to fight for you against your enemies, to give you the victory. (Deuteronomy 20:1-4)

Secondly, in times past, man understood that the wars of men were wars led by gods. This is one of the reasons that at the conclusion of WWII, the Emperor of Japan offered up Japan as a Christian nation. The defeat of the nation meant the defeat of its god.

Biblical war also has thought for the future and for the faint-hearted.

Thirdly, in Deuteronomy 20:16-18, we see that the purpose of war was also to protect and preserve godliness. And so, all of the characteristics of pagan life were to be destroyed, along with those who would otherwise make pagan disciples of the Israelites.

Among other things, biblical war meant the complete removal of idolatry.

In Deuteronomy 20:19, we go on to read something which may at first seem out of place.

When you besiege a city for a long time, making war against it in order to take it, you shall not destroy its trees by wielding an axe against them. You may eat from them, but you shall not cut them down. Are the trees in the field human, that they should be besieged by you?

The commandment here is a specific application of a general principle – the godly stewardship of creation.

This principle applies, not only to human life but to apples, blueberries and all the rest of God’s good, edible world.

As a more general principle, the earth is God’s property and so we are not to war against it.

This law is, as far as we know from history, unique to scripture and recognises a Creator who stands above all men and all gods. 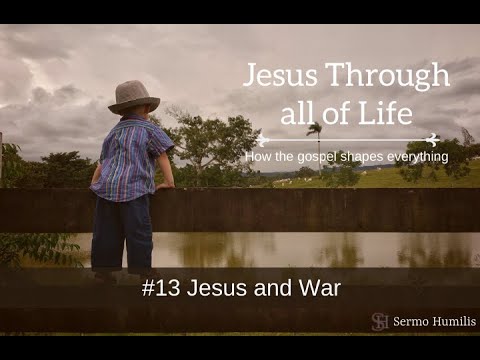 The Gospel as Warfare

Many people look at the wars fought by God’s people under God’s command in the Old Testament and then, noticing that such wars are glaringly absent in the New Testament are tempted to think that the God of the Old Testament is virtually another God altogether or else He underwent some serious self-improvement between Malachi and Matthew. This is not true.

The Holy Wars of the Old Testament were shadows and types of the way in which Christ would put an end to sin and death in the Gospel.

They were God’s righteous judgements against a wicked generation.

To object to God’s judgement for sin is to cast a vote for the increase of wickedness. But, as this law shows by its preservation of fruit trees, war also had a far more glorious goal in mind.

Namely, to plant and build.

Negatively, the removal of sin requires war and foreshadows final judgement. Positively, the building of a truly godly community on earth requires it.

Many Christians are led to believe that our warfare is against wealth, poverty, social injustice, discrimination, zippers, short skirts, inequality, littering and so on. But the Great Commission, which constitutes our marching orders, paints a different picture.

Christian warfare is not a fight against vice or political and social circumstances. It is a war against sin. It is a fight for paradise.

In building, planting and making disciples of all nations, teaching them to turn from idolatry and obey all that Christ has commanded we are offering the terms of peace.

But there is a caution needed here. It is possible to be in possession of a perfectly good field and spend fifty years fighting the weeds and make little or no progress because we never bothered watering and planting the fruit trees.

In the Gospel, kingdoms are brought down by the spread of a new kingdom that Christ has now established upon the earth. We wage war, not against flesh and blood, but against principalities and powers which Christ has already conquered.

And we wage it by planting and building into the lives of others. We are not to destroy the trees (Mark 8:24), but work, water, plant and prune to see them transformed into fruit-bearing disciples of the Lord.

#3 Jesus and Betrothal
#15 Jesus and Government
#1 Jesus and Inheritance
Jesus, The Battle for Mercy

In Luke 14:26-35 Jesus turns to the multitude of weary, shepherdless