Hide Search
You are here: Home / Jesus Through all of Life / #18 Jesus and Death
Reading Time: 4 minutes

When it comes to dying, there are three positions you can take. You can not care less whether you live or die. You can deny the reality of death, or you can defy it. The Christian position is to defy it.

The first option is the one we see in the days of Rome’s collapse, and increasingly today in the west. And so a common epitaph on Roman graves was, “non fui, non sum, non curo”, which translates, “I was not, I am not, I care not”.

It was a mark of a despairing culture where life had become meaningless. In such a culture, abortion and euthanasia for any reason become mainstream options. Who cares, right?

The second option is something we have all seen in the west over the last century. Denial. Here, we fight the reality of death with a cosmetically and artificially driven obsession with youth. If the goal of a despairing culture is to escape from a meaningless existence, then the goal of a culture in denial is stasis and stagnation.

No growth, no maturity, no destination. Just fear and dread, leading to denial.

In contrast to both of these, Christians look to Jesus Christ and see death defied. Here’s Job, testifying to this very thing, 2000 years before Jesus.

For I know that my Redeemer lives, and at the last he will stand upon the earth. And after my skin has been thus destroyed, yet in my flesh I shall see God, whom I shall see for myself, and my eyes shall behold, and not another. (Job 19:25-27)

The word of God teaches us that death is an intruder (Psalm 18:4-5) that comes to all for two reasons. First, because Adam sinned and we are his descendants. We were there in the garden when Adam sinned.

Therefore, just as sin came into the world through one man, and death through sin …so death spread to all men. (Romans 5:12a)

This raises a fair question. Why should I suffer for what Adam did?

Because, as Paul goes on to say, you proved yourself a child of Adams fallen race, because you all went ahead and sinned too (Romans 5:12b).

And so, not only do we stand guilty under Adam, our own sin testifies to the reality of our guilt.

Therefore, as one trespass led to condemnation for all men, so one act of righteousness leads to justification and life for all men. (Romans 5:18)

The implication here is huge. 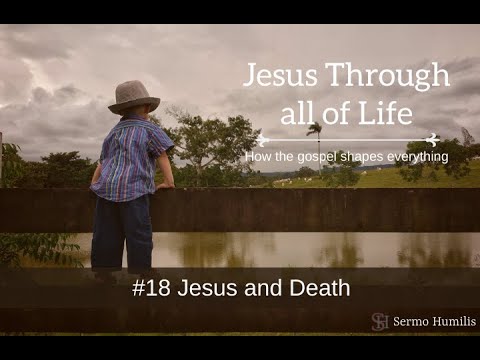 There are, in this world, two heads of humanity. Under one, all die. But under another, all live. And so, if you want life in Christ (which you did nothing to merit), then you first have to acknowledge your guilt in Adam.

And so under the law, death is Gods response to your sin, but in the Gospel, Jesus is God’s response to death.

This means that if you want to understand death; if you want to come to terms with death, you must zero in on the death of Jesus. And when you look at His death, what do you see? You see that His death not only put an end to your sin, it also put death to death.

When the perishable puts on the imperishable, and the mortal puts on immortality, then shall come to pass the saying that is written: “Death is swallowed up in victory.” (1 Corinthians 15:54)

And this is why, for the believer, death does not lead or point to meaninglessness, or despair, or even sin and death itself. Death points to Jesus as a resurrected Saviour through whom death was defied, defeated and destroyed.

God tells us that He does not afflict us willingly or from the heart (Lamentations 3:33). Affliction is not His deepest desire for the sons of men.

Your own death, the death of those you love, is a shadow; a dim reflection of something planned from eternity. It’s a retelling of the Lamb slain before the foundation of the world (Revelation 13:8).

Jesus’ death deals with sin and death. It deals with crime and punishment. To hold these truths dear to our heart is to adorn Christ, even in death. Look anywhere else and you will either end up in denial or despair.

In the Gospel, we still die, but having laid our hands on Jesus, the New Man, we will also live.

In the death of Christ, we receive free, triumphant and overflowing grace. Undeserved and unaided by men. God’s riches at Christ’s expense. His death conquering our death so that in death, we might adorn and magnify His life (John 21:19, Philippians 1:20).

The fool despises wisdom and discipline. But this not what made him a