Hide Search
You are here: Home / Jesus Through all of Life / #19 Jesus and Mourning
Reading Time: 4 minutes

Mourning and grief over loss are universal experiences. And even though we rejoice that Jesus has died and been raised from the dead, we still regard death as an enemy and not a friend.

So, on the one hand, because we love life, we can affirm that grieving is normal and right. But, because in Christ we are now heirs of life and not death, we also need to add that our grief, though very real and painful, must not rule us or set the tone for our lives.

Grieving is right. God law sets the boundaries for our grief and Jesus affirms these boundaries. The gospel now sets the tone.

So, the first thing we need to do is affirm that grieving is right. Jesus grieved over the impending destruction of Jerusalem and the loss of His friend Lazarus. Jesus also acknowledged His mothers’ grief over His own death and comforted her by entrusting her care to John.

Jesus also tells the disciples that they will mourn His Death with fasting. And, the people of God are told to grieve over defeat in battle and in God’s judgement for sin.

However, there are boundaries to our mourning, set by God.

All of these expressions were a witness to a deep sense of personal loss.

However, other common marks of mourning such as shaving, cutting and tattooing, were forbidden (Deuteronomy 14:1)

Why does God command His people to limit their self-expression in this regard?

Israel was to be a Holy people and to keep themselves from defilement. Especially the defilement they saw in the common cultural practices of the nations round about them.

And so, physical contact with the deceased rendered a man or woman unclean. 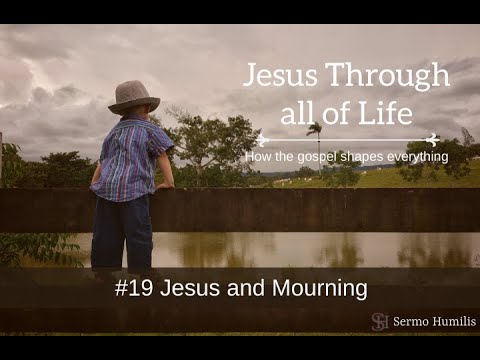 A beautiful example of the limits of grief is found in Nehemiah 8:9-12. After hearing the terms of the covenant, many wept and grieved over sin. But Ezra told them not to grieve because this was a day of thanksgiving and rejoicing over the Lord who had forgiven them. Instead, feasting and gladness of heart were the order of the day.

The Lord Jesus Affirmed the principle behind these laws for His disciples (Luke 9:57-62).

Some think this verse is talking about the spiritually dead: Those dead in trespass and sin; as though Jesus had said, “Let the unbelievers bury each other”.

The principle behind this interpretation is that Jesus comes first, even if it means leaving a pile of unbelieving bodies lying around. But this is appalling and sets the commandment to honour your mother and father in opposition to the teaching of Jesus.

It’s more likely that Jesus is simply issuing an admonition about the believer’s orientation toward life. Life for the disciple of Jesus is not to be pre-occupied with death.

Having buried your father, let it be. For like Lot’s wife, the look backward can be fatal.

And so, we must be wary of nostalgia and “the good ‘ol days”. The words, “Let the dead bury their dead” is a caution against being unduly attached to the past or continually absorbed with grief over what cannot be mended.

The orientation of the believer is to be, on the whole, future-orientated.  Our time is not to be characterised by our association or union with death but with life.

In some cultures, this union with death takes the form of ancestor worship. In our culture, these symbolic unions with death include a preoccupation with mainstream media-fuelled, apocalyptic-style zombie meets poison-monkey, we’re-all-gonna-die disaster imagery.

Such pre-occupations are an inversion of the gospel since they cultivate a worldview of despair and defeat. They set forth the victory of Satan rather than the victory over him which we have in the Gospel.

The reason we can mourn, yet not be ruled by grief is that Jesus died and rose again.

Our Grief, though painful, is not to set the tone or direction for our community because we are heirs of life, not death. We are a community that experiences real tears and real grief but also real hope and real-life because we have a resurrection. We anticipate a reunion with Christ and with one another.

Jesus bore our grief and that means, among other things, that our grief need not overcome us. In His death, Jesus acknowledges our grief and receives it in Himself. And so we are now free to adorn our own lives with the hope of a resurrection.

God can be found, unsurprisingly, in the most surprising places. Take

What should the world see when it looks at us? It should see Jesus

Believers are a congregation of God's people. They come from many