Hide Search
You are here: Home / Jesus Through all of Life / #2 Jesus and Work
Reading Time: 3 minutes

Throughout the New Testament Jesus is set before us as a worker who labours for the increase of others. He is the faithful servant who labours from love on our behalf and for our good. He’s the Sower, the Potter, the Farmer and the Shepherd who came, not to be served but to serve.

Work is so basic to the created world that God Himself is depicted as a worker. Like a master builder, He laid the foundations of the earth and the heavens reveal His handiwork.

With the garden as his capital, Adam was to be fruitful and multiply what he had in a way that provided for others and ensured a happy rest for all. In this way, his work would be characterised and motivated by a love for his neighbour.

When man changes the purpose of work from love for neighbour to the pursuit of selfish ambition, man loses his dominion and both the work and the worker tend toward oppression.

Work that pleases God is work that is tied to love because these are the things that make for true rest. And so, the emphasis of the fourth commandment to “Honour the Sabbath”  is not that I labour so that I can enter my rest (though I do), but to ensure the rest of those around me.

This is an important characteristic of all our work and is stated beautifully in Ephesians,

Let the thief no longer steal, but rather let him labour, doing honest work with his own hands, so that he may have something to share with anyone in need (Ephesians 4:28).

Here we see that through the gospel, the labour of a repentant man is transformed from one of selfish gain to the enrichment and rest of others. 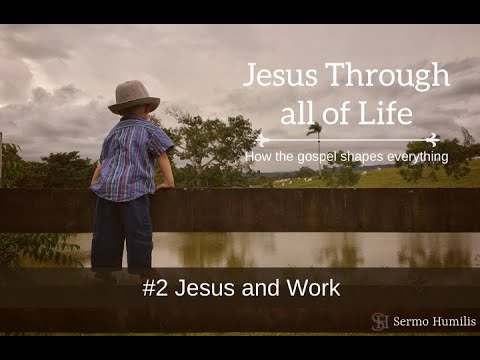 In Deuteronomy, we read,

You shall not oppress a hired worker who is poor and needy… You shall give him his wages on the same day, before the sun sets… lest he cry against you to the Lord, and you be guilty of sin. (Deuteronomy 24:14-15)

Prompt payment for work done was required for at least two reasons.

First, to withhold pay is theft since it is to withhold someone else’s property. Wages are not a reward, they are a debt (Romans 4:4).

Withholding wages is theft. It’s not the employer’s money. By engaging a worker the employer has incurred a debt which he is obliged to clear without delay.

In applying this principle to our own day we understand that many workers agree to receive their wages weekly or even monthly. This is fine. What is critical is the principle: Wages are debts.

Thus the honest treatment of a worker in his pay is not simply a reward but a godly obligation.

Secondly, to withhold pay is also akin to taking a life since those wages are the ordinary means of our existence.

To withhold a man’s wage is to threaten his capacity for life and rest. And so, drawing on the principle behind Deuteronomy 24:6 and Jeremiah 22:13, Israel’s teachers taught,

“He that defrauds the labourer of his hire is guilty of bloodshed.”

Wages exist because God Himself pays wages. But, because of our sin, those wages are death.

In the gospel, Jesus comes to mankind and accepts the wages of our sin. He labours from love, for our prosperity, deliverance and rest. (Isaiah 53:10-11)

And so, in the finished work of Jesus, the curse over labour is broken and work is transformed from one of selfish ambition to godly progress and a joyful opportunity to labour for the increase of those around us (Isaiah 65:21-23).

And, just as the Lord’s labour beautifies all that His hands touch, so our labour is to beautify.

In this way, the gospel begins to adorn our labour. We now work to multiply the rest of those around us. And we now labour in such a way that no debt remains except the debt to love one another (Romans 13:8).

#7 Jesus and Parenthood
Jesus, Proof of Pardon
Pray for them that Keep Watch
Ants in a Broken World

After a person has been a Christian for a while, it's natural for them

Irrespective of the current zeitgeist, the pattern for godly family

When it comes to worldview thinking, especially when that thinking is