Hide Search
You are here: Home / Jesus Through all of Life / #8 Jesus and Education
Reading Time: 5 minutes

Jesus was taught by His Father, “I do nothing on my own authority, but speak just what the Father taught Me” (John 8:28), and promised that our heavenly Father would teach us too, “As it is written in the Prophets, “And they will all be taught by God.”” (John 6:45).

But the king’s of the earth would much rather God didn’t do any teaching. And so, John Dunphy, speaking of the role of Public Education in 1983 said,

I am convinced that the battle for humankind’s future must be waged and won in the school classroom. The classroom must and will become an arena of conflict between the old and the new:

The rotting corpse of Christianity, together with all its adjacent evils and misery, and the new faith of humanism, resplendent with its promise of a world in which the never-realised Christian ideal of “love thy neighbour” will finally be achieved.

Sometimes it seems that the only people who don’t realise that there is a war going is us. But there is a battle and it’s a battle for hearts and minds.

For the weapons of our warfare are not of the flesh but have divine power to destroy strongholds. We destroy arguments and every lofty opinion raised against the knowledge of God, and take every thought captive to obey Christ. (2 Corinthians 10:4-5)

As parents, we are not only called to adorn our own lives with the Gospel, but also that of our children.

This is the great shema or daily prayer of Israel, and Jesus says it is the the greatest commandment.

Here, the commandment to love God with all our being is tied to the need for a God-centred education (Deuteronomy 6:6-9).

And so, education is not only warfare, it’s worship. 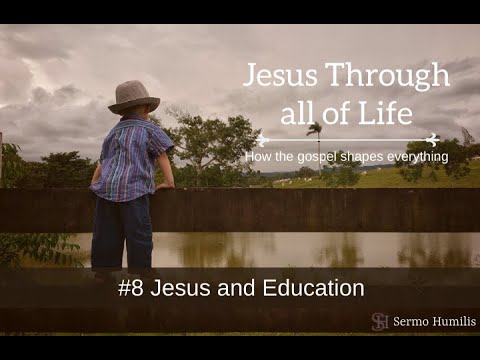 The goal of education is not to get a job. It’s to teach the coming generation to love Jesus and to know God. And, according to Jesus, Moses and Paul (Ephesians 6:4), the responsibility and authority for this education rests with the parents.

Beyond that, the Church community is accountable for the instruction, discipleship and support they give to families in their efforts to raise their children in the nurture of the Lord.

There are many ways that a parent might fulfil this high and weighty calling, but, by the very nature of the commandment, parents must at least be present in some way.

Many parents, in an effort to compensate for their child’s godless education by strangers during the day, try to bring some godly correction by night.

This is a tough ask, and noble desire.

Some parents, in an effort to raise godly children, aim for the complete removal of all influences outside the home. This too is a tough ask and depends greatly on what is actually being taught in the home.  A godless curriculum is godless, wherever it occurs.

So, beyond being present, a parent must also maintain a biblical standard over a child’s education.

That standard is the fear of the Lord, which is the beginning of wisdom and knowledge (Proverbs 9:10). Thus, deep reverence for God in all areas of life, all of the time (Deuteronomy 6:7) is both the goal and means of a godly education.

It will involve the whole counsel of God (2 Timothy 3:16-17) as that which will equip our children for every good work throughout their adult lives.

The evidence that this is going on will be the fact that the starting point in each child’s mind (regardless of where or with whom he is seated) will be God Himself.

The first law of economics is not Gossen’s Law of Diminishing Marginal Utility but that unjust weights and measures are an abomination to God.

The first purpose of history is not the study of Man but the revelation of God’s justice, goodness and faithfulness in Jesus Christ throughout time.

The first function of mathematics is not it’s usefulness in counting apples or loose change, but to reveal the immutable, eternal, unchangeable and internally consistent and incorruptible beauty and character of God.

The first and central issue on the table in any geography lesson is not where we are, or how we got there but the fact that God owns all the land and has given it to His Son who graciously distributes it to whomever He wills.

By contrast, where God is not the reference point for all things at the beginning of our learning, He soon becomes absent throughout.

And so, you wind up with a curriculum like Connected Mathematics in which the teacher’s manual states:

“Here, Children learn that mathematics is man-made, that it is arbitrary, and good solutions are arrived at by consensus among those who are considered expert.”

An agnostic education is not neutral. It teaches that God is peripheral to a child’s learning. God, if He exists is irrelevant and unnecessary to a proper understanding of physics, fan belts or agriculture.

Since neutrality is impossible, some other standard for education will always fill the void.

In education you have two basic choices: Either you apply the same standards across all dimensions of life and allow for varying results. Or, you aim for equality of results and vary the standards.

But because this is not the way God made the world, if you opt for the latter, the system must be rigged. And so you find yourself engaging in the ridiculous spectacle of passing a first-year apprentice chef who can’t boil an egg or the shameful act of putting your daughter, standing at 5-foot-nothing, on the front lines in Syria.

Equality of outcome, or egalitarianism, aims to neutralise differences between people but it fails because in the world God has made, people are different. Some will excel, some will bring up the rear. Most will land in the middle.

But God does not head off failure at the pass through egalitarianism: He does not vary the standard.

Instead, God extends the offer of grace by making the cross the place where the standards are met.

And so, the centre of all education is the cross.

All of our learning is to be a gathering around Jesus and His Word from the Father.

And so, an education where God is absent in any area of learning is not only an absence of vital truth, it is an absence of saving grace.

Grace needed for children who stumble in their learning and grace needed for parents who feel the weight of responsibility and the heartache when things go pear-shaped.

This calls for humility. It means that while we acknowledge the outcome is in God’s hands, we also acknowledge that He has placed the standards in ours.

Jesus has something to say about art, literature, bread-making and the sciences; as well as love, justice, humility and morality.

And it is our joy to teach it all so that we may sing with Asaph,

The things that we have heard and known, that our fathers have told us. We will not hide them from the children, but tell the coming generation the glorious deeds of the Lord, and His might, and the wonders that He has done. (Psalm 78:3-4).

To bring every thought captive to the obedience of Christ.  This is our warfare and our worship, and it happens in our education.

Little arms like to wrap themselves around big things. There's the

Sunday is typically a day of rest for the church. We have several rest

The day of the wedding had arrived. Having paid the highest price, the