Hide Search
You are here: Home / Who we Are Instead / Ants in a Broken World
Reading Time: 3 minutes

How much God loves those who are so seemingly small compared to Himself is hard to imagine. This world and it’s human inhabitants are like a derelict house with a really bad stench in some rooms and walls riddled with asbestos.

Do we renovate or burn it to the ground? What would God do? Would He come down and do the makeover or would He discard this world and start over?

This story comes courtesy of Notes from a Tilt-a-whirl by Nate Wilson. I am drawing on my own notes taken some years ago so apologies to Nate if it’s imperfect.

Spring is here and its time to mow my lawn. That includes removing all of the rubbish thrown on to it since last summer.

There is a huge rock buried deep in the soil. I pluck it from the earth and throw it into the bush. For some, that large rock was a haven, a shelter, a world. I bend down. Six-legged creatures. Ants swarming around my feet.

I have exposed the nursery chambers of these cave dwellers. A bird sits in the tree hoping I will leave him to the wreckage and the carnage. What will be the death toll on this fine spring day?

I would not throw an ant world into the geraniums for no reason. I need to mow my lawn. 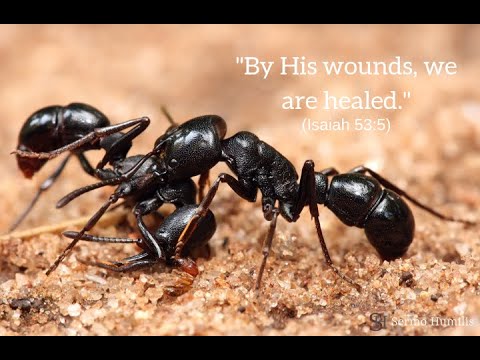 Do these ants have names for their disasters? Are birds tropical storms? Am I a hurricane? Did their weatherman predict me? How many will lose their jobs on account of this? What are they saying as they swarm to recover their broken world?

As I watch indignant ant soldiers have begun dragging earwigs into their quarry, rounded up from who knows where. Like every civilisation, they need a scapegoat.

“Who tore down our sky?” Who opened our world and punched a hole through the ozone bringing down this sizzling sun to burn the backs of our young?”

I wonder what’s going on. Lots of screaming, yes. But no doubt there is amongst them some older, wiser ants further down below with stiff joints rolling their aged eyes and clicking their mandibles.

The cry goes up! “It was the earwigs! They have brought this upon us!.”

The gods demand a sacrifice and so the ants are now killing the earwigs. Two earwigs are now dead.

More writhe upon the ground, their backs arching in pain, their pincers splayed and pointing towards the sky hoping for deliverance. I won’t be delivering them. There is no such thing as an innocent earwig.

I am tempted to put the rock back. But then it occurs to me that perhaps these sacrifices are for me.

They might know that the earwigs had nothing to do with the devastation of their city. “Here, take the souls of these earwigs.” “How many do you want? We will keep killing until your wrath is appeased.”

How much do I care for these ants? I think I care. I will stop and watch their wars and I won’t crush them if I can help it. But, if given the chance, would I be willing to become one of them?

Would I be willing for them to drag me, like the earwigs, to the place of execution and be tortured, a victim of their rage, their sin?

Would I be willing to surrender my superior post only to be mocked, bitten and beaten?

Do I love these arrogant but helpless characters enough to give them a gift that is entirely beyond there comprehension?

Jesus did. He was pierced for our transgressions; He was crushed for our iniquities. And by His wounds, we are healed (Isaiah 53:5).

God is our Father. He is the penultimate Father and He rules the

The Christian life is depicted as a journey. A walk with God. We are