Man, being made in the image of God, cannot live without a mediator. He needs someone to act between himself and whatever it is that he thinks is running the universe. Whether it be God, gravity or government.

“You make springs gush forth in the valleys; they flow between the hills… From your lofty abode you water the mountains… You cause the grass to grow…”(Psalm 104:10-14)

When it comes to selling sparrows, says Jesus in Matthew 10:29, not one of them falls to the ground apart from the will of our Heavenly Father.

I take it, therefore, that apples, being sold right beside the sparrows, fall for the same reason. My Fathers will.

The modern world, however, seems to dislike the thought of a loving hand freely guiding the ups and downs of life and have sought to remove all traces of His fingerprints.

Rain falls they say, because of small tubular-shaped vortices. Apples fall because of gravity. Mountains erupt because of magmatic pressure and,

A tree grows fruit because it is a magic tree. Water runs downhill because it is bewitched.” (G. K Chesterton, Orthodoxy. Chapter 4, The ethics of Elfland)

In other words, a personal and powerful hand is no longer required. We have the mysterious, magical and impersonal ‘forces of nature.’

I would say that the only reason tectonic plates move and mountains smoke is because Jesus touches them (Psalm 104:32).

Others, will acknowledge that God causes rain, apples and sparrows to fall, but will add that He does so by, “means of natural forces, which He created.”

But the scientific men do muddle their heads, until they imagine a necessary mental connection between an apple leaving the tree and an apple reaching the ground. They do really talk as if they had found not only a set of marvellous facts, but a truth connecting those facts.

The world wants an intermediary to connect the facts. It acknowledges the need for a go-between, a mediator. 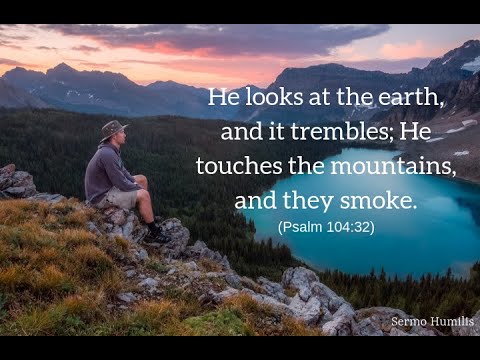 There is a mediator, but it isn’t gravity. It’s Jesus Christ, in whom all things graciously hold together (Colossians 1:17).

When the earth totters, and all its inhabitants, it is I who keep steady its pillars. Selah. (Psalm 75:3)

The consequences are obvious. One worldview leads us to address (with a fair measure of panic) the problem of ‘climate change’ – whatever that means. The other will bring us to our knees before God.

One sees the fingerprints of the God of Heaven who can be worshipped for His ordering all things according to His own will, the other sees only cause and effect in an accidental universe.

God leaves His fingerprints everywhere. Perhaps it isn’t gravity holding our feet to the ground at all. Perhaps it’s the direct activity of a heavenly God who does whatever He pleases (Psalm 115:3).

But in the light of that kind of freedom, cause and effect go out the window and we are left with dependence on Gods grace: a risky proposition.

Jesus came into this world to bring life to people who were dead.