Everybody has a god, it’s inescapable. Whether it’s yourself, an author, celebrity or your dad, there is something at the top of everybody’s hierarchy of authority. For Stephen Hawking, it was an indifferent little force called gravity.

Most people have probably heard of Stephen Hawking. Some may have even read his book, The Grand Design.

One of the main conclusions of The Grand Design is,

Because there is a law of gravity, the universe can and will create itself from nothing…

In other words, gravity displaces God. God is unnecessary because we have gravity.

You can’t have it both ways. Either God is holding this joint together by direct power (Hebrews 1:1-3), or we are being glued to a ball by an impersonal force.

Oxford Mathematician, John Lennox has responded to the contradictions in Hawking’s statement in his book, “God and Stephen Hawking: Whose Design Is It Anyway?”

My curiosity is that such a respectable scientist as Hawking would come out and say it.

Openly pitching gravity against God as though the “law of gravity” were a thing and not just an equation – now there’s something we can work with. 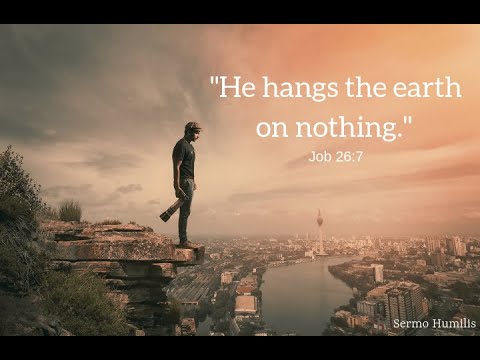 Hawking tries to explain away the existence of God by interpreting his “laws of nature” as magical forces. But the laws of physics or Newtons laws of motion don’t do anything.

They are simply a mathematical attempt to describe what we see.

Does gravity think? Does it care for sparrows? Is it jealous? Does it have a great white throne?

Gravity does not explain falling leaves. Again, the “laws of nature” are an attempt to describe what is happening, but they don’t cause things to happen. God does.

Are not two sparrows sold for a penny? Yet not one of them falls to the ground apart from your Father’s will. (Matthew 10:29)

In a world where an invisible, impersonal force is what is keeping my feet on the ground, Jesus is nudged that little bit further from the scene. But that does not leave us without a God. When you attempt to displace one authority, a new one quickly rises in its place.

And so, in the last few hundred years, we have created a virtual sea of magical new gods for ourselves.

But, the gods we imagine for ourselves don’t come without consequences. As Stalin, Mao and Pol Pot so sadly demonstrated,

Those who make them become like them; so do all who trust in them. (Psalm 115:8)

This suits the dark heart of man. Gravity does not call you to account. It doesn’t judge your actions. It demands nothing, has no opinion and no voice. It is loveless, indifferent and couldn’t give a rip about a mother’s grief.

If we accept Hawking’s claim, can I then ask, “Where did all this gravity come from?”

If the universe was created from nothing by means of gravity, then who or what is gravity and how did it get here?

Hawking’s needed a Big ‘G’ to get his ball rolling. But why does he choose gravity? Why does he want you to spend your life in a damp, dark basement with his cold, indifferent little ‘g’?

Why not move upstairs where there is a bit more light and consider – for just a minute – the far greater certainty of an even bigger ‘G’? A God of all Grace.

Intrigue or value. A week in the Bahamas or a bin full of dirty

A monarch is like a fixed star, the North Star. In some strange way,

Some sins are more subtle than others. Take our desire to change

Until now, Jesus has used Capernaum as a base for ministry. He has