Is age an enemy? What do you do when you have reached the summit of physical and mental fitness? How do you maintain hope when you are staring down the barrel of old age?

For many, age is something to be fought and feared. While we are young hope tends to flourish. Each birthday means growing stronger, smarter and more productive. But how do you sustain hope when it becomes obvious that the house is beginning to creek and sway?

We live in a youth-obsessed culture. Age is despised, hidden and fought to the bitter end. We see this, not only in the vain, comical attempts by adults to look young but in the political and social sphere as well.

The opinions, fashions and morals of hormonal teens reign supreme and the aging Nan, along with her wisdom, is shut out. 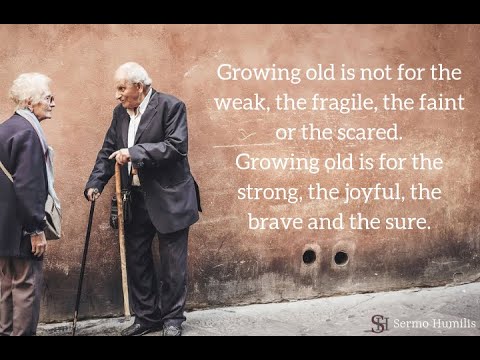 Why? Because we have conflated age with death, and when you do that, age becomes your enemy.

For Pierre Cornielle, a French playwright famous for his tragedies, old age was a reason to despair. Growing old for him meant decrease, darkness and loss.

And again, from Dylan Thomas,

Do not go gently into that good night but rage, rage against the dying of the light.

The bible speaks of age very differently. In scripture, age, along with its very real difficulties, is a season of contented maturity and something to be honoured (Proverbs 23:22).

The righteous flourish like the palm tree… They are planted in the house of the Lord; they flourish in the courts of our God. They still bear fruit in old age; they are ever full of sap and green. (Psalm 92:12-14)

What is it that a man in love wants when he courts a girl he likes? Answer: He wants more of the relationship with her than he already has.

He wants the deepest, richest, most satisfying mode of togetherness that is possible for him to have. In other words, he wants more of what he has already.

The key difference between these two men lies in the object and direction of their hope.

If our hopes in life are all pinned to things which fade away, then age means the demise of hope. It means only loss.

For those who reject God, life’s final moments are characterised by a fearful look back on that which is vanishing fast.

For Lewis and the believer, age means drawing nearer to the object of our affections and the unfading gift of eternal life through a resurrected friend. It means gain.

It means gaining more of what we already have. It means anticipating the most satisfying mode of togetherness possible, with Jesus first, and then each other.

For those who are following Jesus to the grave something joyful lies ahead, even in the midst of creaky bones and blurred vision.

If you have ever been down, depressed, perhaps even longing for life

A servant of the gospel has a simple task. Shepherd the flock that is