Jesus is the eternal ever-present Son of God who not only created and sustains the universe but entered into it as a Mediator because He loves it and because He has chosen to save it.

God spoke this world into existence through His Son. (John 1:3)

Much like what happens when you breathe into the empty space of a flute and the result is music, so too when Jesus spoke, the notes became material and this world was born. You appeared.

Jesus doesn’t point and say, “Tree”. His voice is its existence and calls forth those things which are not. He is,

…the God who gives life to the dead and calls into being the things that were not. (Romans 4:17)

His word carries with it the power of life. And so, we understand, that the world is not made of self-sustaining matter or forces. (Hebrews 1:3). The notes do not sustain themselves. They must be breathed into existence and afterwards sustained by that same life-giving breath.

We Live in A Spoken World

“Tree”, “Daniel”, “Antelope”, is His word in active, ever-present three-dimensional wonder. And so, were He to stop speaking the tree would not fall over. It would simply cease to be.

In Jesus, in every moment, we live and move and have our being and we continue to be.

When Isaac Newton put forward his theories, he was commenting on the notes, their sound, vibration. For Newton, gravity was not a thing: Not a cause.

The laws of motion don’t hold the universe together. They describe and reveal patterns of activity but they are not self-perpetuating impersonal powers.

Newton argued from His theories that such a finely tuned world required God’s constant steady hand. This prompted an attack from others in the scientific community. Leibniz argued, tongue in cheek, that,

“Sir Isaac Newton and his followers have also a very odd opinion concerning the work of God. According to their doctrine, God Almighty wants to wind up his watch from time to time, otherwise, it would cease to move. He had not, it seems, sufficient foresight to make it a perpetual motion.”

Leibniz was taken by the inefficiency of the thing. Newton was captivated by the beauty and miracle of it all.

Leibniz jibed that such an immaterial influence would be a continual miracle.

To which Newton’s camp responded with a loud, “Amen”. For that is exactly what this world is. One beautiful, constant and continual miracle. 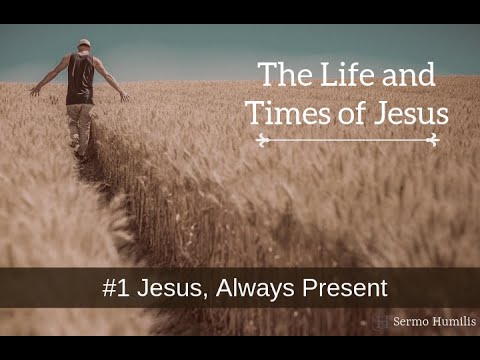 This world is a miracle that reveals just how close Jesus is – and that irritates a sinful heart.

It makes us totter nervously as though on the edge of something. It makes our lives and the existence of everything in creation entirely dependant on the continual Word of one ever-present Being.

He Became What He was Not

In His Incarnation, Jesus not only continued to be present, but His eternal beauty, wisdom and power became tangible, palpable, touchable (John 1:14).

In His Incarnation, Jesus entered into creation and becomes what He was not. One of us. (1 John 1:1-4)

He became our substitute for sin and made a way for Man to be reunited to God. He then returned to Glory, enthroned as a Man.

And He Became our Friend

What are we to make of this Man? The Apostle John, the same guy who said that every quark and lepton in this universe was created through and sustained by the Eternal Son of God also felt he could lay his head upon the shoulder of the infinite and almighty creator of all things.

That is Jesus. And you may wonder, given His infinite power and perfection, why He loves this world so much, why He loves you. The answer is because you are the work of His hands. We are His handiwork and in us, He delights (Proverbs 8:31).

We are not machines and we do not live in a machine. We are living beings in whom God has breathed the breath of life.

All of this speaks, not of lawful necessity but of the determined will and love of someone who cares very deeply about what happens in this world.

Heaven, it has been said1, is not a hallway of mirrors.

Unlike his father David, Solomon didn't have any wars. But he did have

The Bible anticipates persecution for the saints. We often don't. We