Hide Search
You are here: Home / The Life and Times of Jesus / Jesus, Bring Your Friends
Reading Time: 3 minutes

Teaching, healing and displaying the power of God. This was the earthly ministry of Jesus as He moved from house to house. On this occasion, the house was filled with Pharisees and Scribes.

On one of those days, as He was teaching, Pharisees and teachers of the law were sitting there, who had come from every village of Galilee and Judea and from Jerusalem. (Luke 5:17)

The room is full of experts. You know, the kind that did their doctoral dissertation in hairstyles of the bible and have spent the last 12 years musing doubtfully over a semicolon midway through Zephaniah.

Anyway, they’re all sitting in the front row, brow lowered, laptops poised and ready to blog, tweet and fret about whatever that Jesus says or does.

Meanwhile, some other men with a very different agenda have turned up at the event.

And behold, some men were bringing on a bed a man who was paralysed, and they were seeking to bring him in and lay him before Jesus (Luke 5:18).

They are not there to dispute with anyone. They just want to bring their friend to Jesus. But that is proving difficult for a number of reasons.

First, their friend is paralysed. Moving him about is not easy. Second, his condition would exclude him from the full social and religious life of the community. He is not really welcome here.

For Pharisees, sin is catchy. It’s out there somewhere and it’s in the imperfections. There is enough truth in this to give it traction. The Bible is big on separation, and for good reasons.

But the Pharisees had missed the point and were on a mad mission to separate themselves from everything that sustained an imperfection. They were consumed with the outside of the cup.

How bad was it? They could be described by Jesus as those who might walk by a dying man on the side of the road and not help him out.

So rather than see love for neighbour as a clean thing to do, it became a dirty thing to do because it brought you into contact with a sinner.

The result? They only loved the lovely. Their idea of a lovely world was to get rid of all the unlovely people. 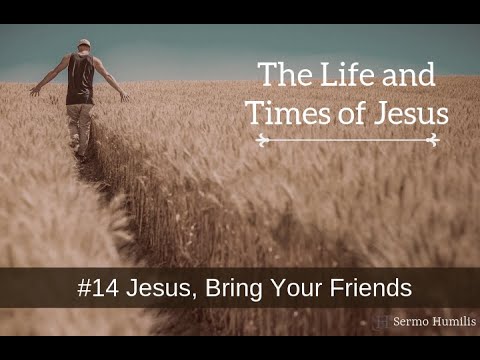 By contrast, God ‘s idea of a lovely world is to save and wash and heal all the unlovely people.

The third thing making it hard to get to Jesus is that this room is filled with a bunch of self-inflated college professors and their pupils, all of whom are hogging the front row, and every other row at the conference.

There simply isn’t any room for a cripple and a few of his wonderful mates.

And his mates are wonderful. Let’s look at what lengths they will go to to bring a needy friend to Jesus.

Finding no way to bring him in, because of the crowd, they went up on the roof and let him down with his bed through the tiles into the midst before Jesus. (Luke 5:19)

There is no mention that any Pharisee got off his iPad to help these men. More than likely, they are quite inconvenienced by the interruption.

How would you go if these lads turned up to your bible study, knocking over a chair and interrupting the guest speaker with their fumblings?

How long before one of us suggested a special room off to the side with a live video feed for such people?

The Pharisees are even less impressed by what Jesus does next. Jesus declares the guy forgiven and then demonstrates that He has the power to forgive by doing something that only God can do – heal the man.

The fact that Jesus declares the man forgiven is important because He didn’t say it often.

Yes, exactly. That’s precisely what He’s hoping they will see. That’s the Big E on the eye chart.

But many are not able to see the Big E because of the Big O. The obstacles.

What are you willing to do to bring a friend to Jesus? What are the obstacles present in your church or in your life that keep people from seeing Jesus? What needs to happen so that those obstacles are removed?

The lads who helped the paralysed man were true friends. They were pushing away the obstacles to get their mate to Jesus.

If you believe that forgiveness is truly possible, bring your friends to Jesus and avoid creating obstacles. Don’t let your conduct, speech or church culture become an obstacle to Jesus.

Make it your ambition to bring people to Jesus. You can begin by making Jesus a visible reality in your own life and then inviting others to come and take a look.