Hide Search
You are here: Home / The Life and Times of Jesus / Jesus, Comfort and Joy
Reading Time: 3 minutes

In the last few chapters of John, the disciples have become increasingly confused by the turn of events. They were expecting thrones, glory and a victorious kingdom to suddenly appear. They have given up everything and thought that they would gain it all back in Christ. Instead, it now seems that Jesus is leaving them.

And the more helpless they become, the more they fumble the ball trying to figure it out.

On this side of the cross, we have never faced the prospect of losing Jesus, being left as orphans. This burden is peculiar to the disciples since they had known Jesus in the flesh.

Peters’going to deny Him, someone is going to betray Him and now, as earlier, He is announcing His departure from them. So, at this point, Jesus sets aside any anxiety for His own trial, crucifixion, betrayal and the desertion of friends and turns to comfort His disciples.

Let not your hearts be troubled. Believe in God; believe also in me. (John 14:1)

In John 14, Jesus comforts the disciples in three ways.

Jesus says He is leaving so He can prepare a place for them.

In my Father’s house are many rooms. If it were not so, would I have told you that I go to prepare a place for you? (John 14:2)

What does Jesus mean here? Many take it to mean that He is going to get Heaven ready to receive them. But, given the context, I am not convinced.

First, it seems hard to believe that this would be of any comfort. This interpretation would mean that Jesus is saying, “I’m going away now, but don’t worry, we’ll catch up and get back together again when you’re dead.”

And if I go and prepare a place for you, I will come again and will take you to myself, that where I am you may be also. (John 14:3)

The issue here is not so much location: Heaven or earth, but the disciples unbreakable union with Christ. 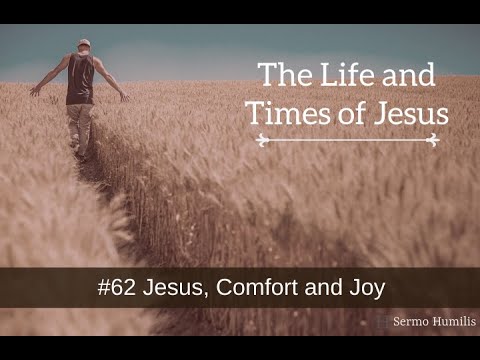 And as they, and we, journey through this life, it is the Spirit who is going to keep our hearts at peace and maintain our faith in Jesus.

This last point is important.

Jesus says that He is telling them these things now in order to comfort them so that when these things happen, they will believe (John 14:29). This only makes sense if the events described are going to happen during their lifetime.

If the comfort is that they go to heaven when they die, then this last verse (John 14:28-29) doesn’t make sense. It makes Jesus out to say that they will believe all of this once their dead, which is a bit late really, and again, not much comfort.

But this is a great comfort.

If anyone loves me, he will keep my word, and my Father will love him, and we will come to him and make our home with him. (John 14:23)

Though His disciples don’t fully understand the inner workings of God’s plan, Jesus is calling us to trust Him, even if we can’t fully see the way we are going.

We have to come to grips with the fact we do not have the map. Jesus does.

But what they do have are His commandments.

And so the evidence of our faith and our love will be keeping His commandments. And we will have His Spirit abiding in us. For our comfort, and for our joy.

Jesus, Insider Trading
Jesus, Justice
A Face to Gladden the Heart
Life in The Spirit

Jesus came into this world to bring life to people who were dead.

In April 1831 Charles Simeon, was asked by his friend Joseph Gurney,

The Bible affirms that the pursuit of rewards is good. It also teaches