Hide Search
You are here: Home / The Life and Times of Jesus / Jesus, A Fisher of Men
Reading Time: 3 minutes

Tempted, yet without sin, Jesus had power and authority to plunder the strong man’s house and would go on to complete the plundering by dying the death of sinners and for sinners so that death itself will ultimately be swallowed up in victory.

Moving into Luke 5 and Jesus begins to call others to join Him in spreading this message of victory.

The calling of the twelve disciples is more than just the beginning of a new Jewish school. Jesus is calling forth a new people and it’s important to note where these people came from.

This new community does not appear out of thin air. They are being called and drawn out from the historic people of God – Israel.

Note the continuity. Like the twelve tribes of Israel, we now have twelve disciples. And like Israel, they are to be a light to the Nations.

In the Bible, the land typically refers to the people of God while the sea frequently represents the nations, the world of chaos, beasts, and darkness (Psalm 65:6-8; Revelation 13:1).

The fact that Jesus selects fishermen to lead His church suggests that, like Elijah and Elisha, they will be sent to the nations.

What follows in Luke is a series of seaside miracles and object lessons on the nature and characteristics of the discipleship that the twelve are being called to and how they will win the nations. 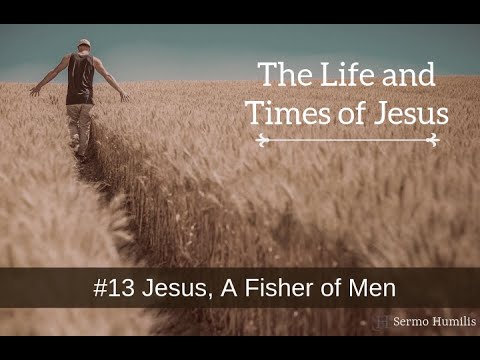 Luke 5:1-3 begins with Jesus sitting in Simon Peter’s boat in order to teach the gathering crowd. Jesus is one who speaks with authority. His authority is not the result of personality or strobe lighting but comes from teaching the very words of God.

The miraculous catch of fish that follows reveals to the disciples the success they will have in their expedition into the sea of nations as they speak the word of God.

Being a disciple means teaching and living by the word of God. And it will be the authority of Jesus’ words in a disciples’ mouth that results in a such a large catch.

In Luke 5:4-5  Jesus’ word demands an obedient response from a disciple.

And Simon answered, “Master, we toiled all night and took nothing! But at your word I will let down the nets.

Peter’s response to Jesus’ command isn’t exactly textbook obedience. Yet, rather than pitch Peter overboard for his half-hearted obedience, Jesus does the miracle anyway.

In this life, our obedience will never be perfect and yet God, in His grace, works with it, and through it transforms a disciple’s life into one of willing service.

Being a disciple means growing in obedience to Jesus and teaching others to do the same.

The third characteristic of discipleship in this passage is humility (Luke 5:6-10a).

…when Simon Peter saw it, he fell down at Jesus’ knees, saying, “Depart from me, for dI am a sinful man, O Lord.

But who said anything about sin? Jesus hasn’t.

Peter’s confession, “Depart from me, for I am a sinful man, O Lord”,  is the result of one thing: Coming into the presence of Holiness (Isaiah 6:5). Jesus’ presence is not only powerful, it is holy. It is holy because He is sinless.

And that Holiness, when witnessed by any sane individual, demands humility. When faced with the glory of God, Peter does the only sane thing.

Like a Philistine god, Peter abandons all boasting and falls down in defeat.

The fourth characteristic of discipleship is single-minded and loving devotion (Luke 5:10-11). We get a glimpse of this in Peter’s willingness to leave his fishing behind.

Disciples are characterised as those who believe the promise, in this case, “…you will be fishers of men.” and, who love the one who promises, “… they left everything and followed Him.”

Just as Peter is learning to trust Jesus’ word for fish, now he must also learn to trust His word for souls.

Multitudes of people are going to be won by the words of Jesus in the mouths of willing, though imperfect, followers of Jesus Christ.

These disciples will be marked by a teachable disposition, aware of their own fragility, yet willing to step out in obedient faith, regardless of the prevailing tide.

Jesus, Justice
Jesus, Our Anchor
Keeping up with the Cool Kids
Jesus, Thy Rod and Thy Staff

John, a cousin of Jesus, turned up on the scene baptising the people