Hide Search
You are here: Home / The Life and Times of Jesus / Jesus, Follow Me
Reading Time: 3 minutes

The Pharisees were disciples of Scribes and Rabbi’s and it was a great honour to be included in one of these elite schools. It also entailed a great sacrifice. You followed your Rabbi everywhere. Your mission was to be like him and so fellow disciples had a saying, “may you be covered in the dust of your Rabbi”.

Though it was a hardship to leave all and be knit to your Rabbi, it also came with a certain sense of pride. It gave you bragging rights and a bumper sticker you could stick on the back of your camel that read, “My kid goes to Hillal”.

Anyway, they are on the scene and they are watching Jesus, who is also a Rabbi. He too was calling people to follow Him; to leave all and be knit to Him.

The problem was, as your typical Rabbi, He was calling all the wrong people.

Unlike the other Rabbis of his day, Jesus came for the sick, the sinner – and not the righteous.

And as far as sinners go, Levi, the tax collector would have been considered among the worst. His job was to collect – or extort – money from Jews in order to give it to the Romans.

After this he went out and saw a tax collector named Levi, sitting at the tax booth. And he said to him, “Follow me.” And leaving everything, he rose and followed him. (Luke 5:27-28)

Jesus walks up to this friendless, corrupt, greedy little man and invites him to follow Him. And He does! This is a radical invitation and required a radical turn around in Levi. And Levi does it. Not begrudgingly but with banners waving. 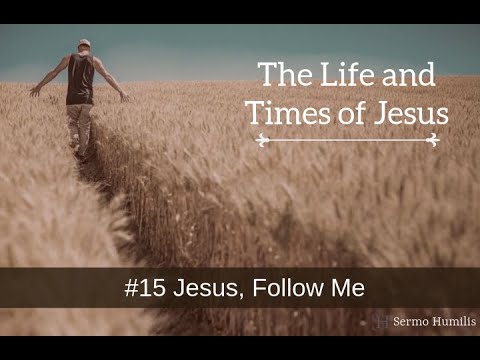 We read this, “He left everything”, which in this instance simply means, he left his job.

He left behind that thing, that idol, that was separating Him from Jesus. But what a huge thing it was! He abandons his tax office and so even if he wanted to return later, he is not likely to be accepted for the post.

We know he didn’t leave everything because he goes home and throws a bender for Jesus and a bunch of his sinful friends. Company Jesus seems to be very comfortable in.

And Levi made him a great feast in his house, and there was a large company of tax collectors and others reclining at table with them. (Luke 5:30)

This is what really gets a Pharisee’s toga in a twist.

And the Pharisees and their scribes grumbled at his disciples, saying, “Why do you eat and drink with tax collectors and sinners?” (Luke 5:30)

Levi is a thief, a crook. But this is what happens when irresistible grace comes by your tax booth or your racket or your corrupt life and invites you to follow Jesus. A transformation begins. Life moves from selfish, self-seeking, sucking-the-life-out-of-everyone-else, to the glorious and generous life of grace.

And Jesus answered them, “Those who are well have no need of a physician, but those who are sick. I have not come to call the righteous but sinners to repentance.” (Luke 5:31-32)

So, Jesus takes their premise and says, in effect, “OK, have it your way. I am here for the sinner, to lead them to repentance. If that’s not you, then I am not here for you. I have nothing for you.”

Jesus isn’t excluding them. They have excluded themselves.

Jesus Christ came into this world to seek and save the lost. To lift up the weak and needy and to forgive the sinner. And you and I are the recipients of that mercy.

But that doesn’t lead to you saying you’re a sinless wonder. You and I are not worthy of so great a salvation. And yet, here we are!

You and I are forgiven and we are joyfully and unreservedly welcomed to the feast by Jesus.

That’s something worth throwing a party over, right? That’s good news. That’s true mercy. The kind of mercy that transforms a life.

And so, like Levi, our homes are to be havens of that mercy. Homes whose doors are open and alive with the partying that goes on when one sinner repents.