Hide Search
You are here: Home / The Life and Times of Jesus / Jesus, From Feast to Fury
Reading Time: 4 minutes

In order to really get your head around what Jesus accomplished in Cana, you have to go to Cana and sit in on this wedding. It’s a week-long Feast. There’s tables, chairs, children running around. There’s good friends, laughter and conversation.

It’s all real, its all earthy and Jesus affirms that it is all very good. From here, Jesus heads toward Jerusalem for the Passover and the atmosphere changes dramatically.

If the idea of God becoming man, complete with a sense of humour and the capacity for real friendship with sinners bothers you, as though such things are beneath a truly Holy God, then you probably won’t enjoy what comes next either.

In this scene, Jesus goes from a friendly wedding guest to a zealous public nuisance.

The Passover was a time when Israel celebrated its deliverance from Egypt. People came to the temple with animals for the altar. These were not sacrificed and thrown in a heap. They were BBQ’d and eaten with joy, a good deal of whiskey (Deuteronomy 14:26) and thankfulness in the presence of God.

If you had to travel a fair distance, you could pick up your animal at the temple. This was an act of kindness on God’s part. But, like many charitable things, someone had learned how to make a buck from it.

Into this busy scene, Jesus walks. Chaos ensues and the religious leaders demand a sign that He has authority to do this. To which Jesus offers the following cryptic reply,

Jesus then walks away and leaves them to stew over the incident. 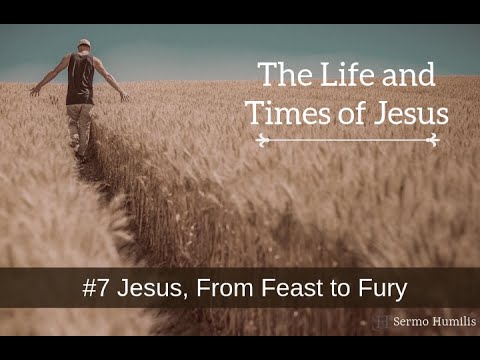 From this brief exchange, I want to make three simple observations.

The temple was a shadow that pointed toward Jesus as the meeting place between God and man. But rather than diminishing its value, the fact that it was a shadow is why it mattered so much to Jesus.

Those who doubt what I say need to explain why they get so touchy when I come into their homes and draw a big black moustache and glasses on the portrait of their grandmother hanging on the wall.

Throughout scripture, the shadow and the thing it signifies are joined by a covenant, like a man and woman in marriage. To defame the shadow or image is to defame the substance (John 13:20).

We should take this to heart in the way we treat those created in God’s image – and the way we speak to people who are attempting to destroy that image.

So also His disciples are likely to be misunderstood and we should not feel compelled to justify our words where they are spoken in truth and love.

It’s okay to let people simmer in their own juices. It is not okay to manipulate them into liking you by backing down with apologies and explanations whose only design is to get you off the hook.

Be misunderstood and bear it gladly.

The event ends with all these people testifying that He is the Christ because of the signs He performed. But raising $40,000 for the church’s creche through a bikini car wash does not justify a bikini.

Likewise, Jesus was not leaning on their applause as vindication for what He just did to those tables and chairs. Instead, He entrusted Himself to God’s vindication.

Who will you call up in your defence on judgement day? Or, more immediately, who do you call upon to vindicate you when people accuse you falsely?

Will you entrust yourself to Jesus, whom God has vindicated before all the world, or will you try and vindicate yourself by pointing to your popularity, reputation, past exploits or your good works?

God has sent Jesus to be our vindication. It was an undeserved act of God’s grace and we are called to trust in it and not in the opinions of man.

God vindicated Jesus at the resurrection (John 2:21-22) and Jesus will vindicate you there too.

Of those who groan under the weight of lifes' little annoyances, we

If you want something, you are going to have to pay for it, or else

Jesus, having won a definitive victory over Satan during His time of

In a recent interview, Journalist Walter Kirn told a story that says a