Hide Search
You are here: Home / The Life and Times of Jesus / Jesus, In the Dock
Reading Time: 3 minutes

After Jesus heals the sick man by the pool in John 5, He disappears into the crowd. Meanwhile, the man has walked back into town and when spotted by the Jews is confronted for carrying his mat on the Sabbath.

What follows is an intricate trial scene complete with judges, witnesses, testimony and a verdict.

First, the Jews accuse the crippled man of breaking the law by carrying his mat. He passes the buck saying that the guy that healed him told him to do it.

Jesus finds the sick man and warns him to stop sinning. The guy then tells the Jews that it was Jesus and so goes from being the accused, to being a witness.

Jesus then becomes the accused and the accusation is that He heals on the Sabbath.

One of the things that happen when you tamper with God’s law is that after a while you can’t tell the difference between your edits and the original document.

It’s like this: You get a new car, register it and then read a book on how to keep your car roadworthy. But you have other ideas and so you go and make all these fancy modifications. You really jazz it up.

But when it comes time to re-register, you get done and your car is taken down to the pit for a whole lot of undoing.

Of course, this ruins your modifications. How do you feel? Furious! But your fury is misplaced. You made the modifications. The authority has just come along and applied the book.

Likewise, when Jesus comes preaching an unmodified law, it makes the innovators furious. 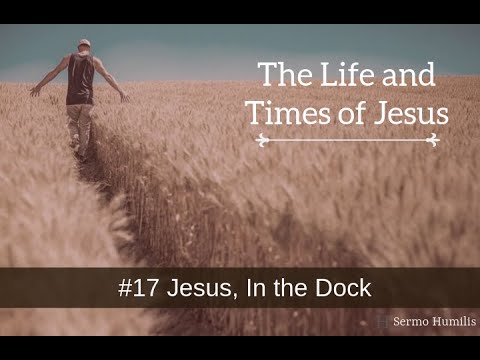 In stepping into the dock as the accused, Jesus brings five witnesses of His own and by the end of the trial, Jesus has become the prosecutor and put the world on trial.

And fifth, in John 5:45, Jesus brings in His last witness, Moses. If you really believed Moses you would believe Me because Moses testified about Me.

Jesus then slips away.

Let’s put ourselves in this trial for a moment. Who do you identify with?

First, we have a sick man. Identifying with this guy seems like a good idea. Like us, he is a sinner and potentially flakey.

Look at what Jesus was willing to do for this helpless, perhaps timid man. First, He heals him, then tells him how to live. He then steps in and takes his place as the accused.

On the day of judgement, when all of the witnesses are rolled out and God requires that you give an account for your life, what will your defence be?

If you are a Christian then you know that you will not be condemned because Jesus has stepped into the dock and taken your place as the accused. You want to be this guy.

Second, we have the Jews. In the middle of this trial, Jesus tells us what it is that has blinded their eyes to mercy (John 5:41-44). They are devoted to maintaining their own reputation before men. Perhaps that’s you.

To which someone might say, “But we need to build bridges and if we start quoting Moses and the prophets we will almost certainly lose friendships, business, respectability or the peaceful relations we now have.”

Now it’s true that scripture tells us to live peacefully together where possible and not act from a bitter heart. But it also tells us how easily tempted we are to tinker with God’s Word so that it fits more neatly with our fears.

And this is the difference between what they want to point to for their justification and what the sick man pointed to for his justification.

Return for a moment to the sick man. The Jews had stampeded the temple and pointed a finger at the former cripple for carrying his mat on the Sabbath.

How does he dodge the accusations? He points to Jesus. But Jesus is cool with that. He’s ready to take up your defence and wear the accusations against you.

The crippled man had a pretty ordinary testimony. “That guy over there told me to carry my mat.” But at least his testimony pointed to Jesus. It drew attention to Jesus and that is all God is asking us to do in the things we do and say.

Jesus, Makes Clean
Jesus, Comfort and Joy
Jesus, What Money is For
Jesus, Clean the Cup

The Christian life is depicted as a journey. A walk with God. We are

In Daniel 9, Daniel sits down with the book of Jeremiah and works out

It matters what you wear. It mattered to God in the Garden of Eden and

Living redemptively means seeking to play out the gospel in marriage.

A veil is a covering that conceals and separates. It is designed to