Hide Search
You are here: Home / The Life and Times of Jesus / Jesus, Meek but not Weak
Reading Time: 3 minutes

The Christian is an enigma to the world. He is a stranger. He belongs to another Kingdom. His ways are so different from the world around him that unbelievers are often left scratching their head (1 Peter 4:4).

Blessed are the meek for they will inherit the land (Matthew 5:5)

These are they who have recognised that they are poor in spirit (Matthew 5:3).  It’s not self-pity. It’s not, “Poor, poor pitiful me”. It’s man seeing himself as he really is.

Such men, by God’s grace, are made meek.

We can handle our own opinion of who we think we are. We can even handle God’s assessment of who we are. But meekness calls for more. Meekness has to do with the way we respond to the assessment and opinions of others.

We typically find the judgements of others unbearable. We resent it. But the person in whom the Spirit is working responds with meekness.

Meekness does not bite back because meekness is willing to admit that even if what the other person says is false, it is still already true that I am unworthy.

Moses to Pharoah, David to Saul and Jeremiah to the Kings of Israel. These men did not have a popular message and were often despised because of it.

Yet, in meekness, they gave up any attempt at self-defence because they saw nothing in themselves worth defending.

But this did not make them jellyfish. No, it made them men to be feared more than ever. For meekness is not weakness. It is power under control.

Meekness is not our natural disposition. It is a work of the Spirit of Grace. Some people are naturally quiet. Some are naturally soft or shy. But this is not meekness.

The man without Christ spends his whole life watching himself, but the meek are done with all that. The meek do not demand that their own interests be served. They do not feel greatness within themselves.

They no longer worry about what others say. He does not talk about himself in terms of what a hard time he is having and how badly he is being thought of by others.

He does not even trust or care about his own judgement about himself. 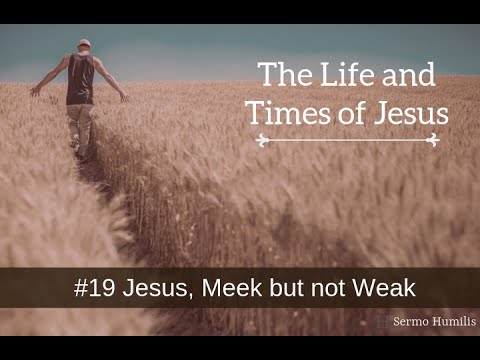 Here, the Beatitudes stand in stark contrast to the ways of the world, and even what many Christians think is the way of victory in the world.

Many Christians think in terms of fighting the world, and sin, and the things that oppose Christ by means of organisation. They say, “Look, there is a powerful enemy set against us and we must unite.”

And so they tell us that we all need to get together, create an institution, picket the parade, make a lot of loud sounds, sign the petition and establish a powerful organisation to combat the evil.

In this way, they think that we will make a lasting impact.

But blessed are the meek. Not those who trust their own organising, petitioning and institutional prowess.

We see this in some Christians who think that their strength lies in the number of signatures they get on change.org.

But that is the opposite of what is called for in this beatitude and is indeed contrary to what we see in Christ and in the Bible.

This is what the Sovereign Lord, the Holy One of Israel, says; “In repentance and rest is your salvation, in meekness and trust is your strength…” (Isaiah 30:15)

In Gideon, instead of a great, organised army, we see a ragtag remnant of puddle drinkers. In Christ, who could have called on a legion of angels, we see a few illiterate fishermen.

It was meekness that was at work in a little monk called Luther and a little old lady called Granny Brand.

And it is in the little huddles, the unexpected, small, insignificant towns and congregations endowed with meekness that we see the Spirit of a lowly Saviour go forth conquering and to conquer the world.

Israel's journey through the wilderness is a journey to a New Eden, A

Some consider the idea that "God is" to be the ultimate