Hide Search
You are here: Home / The Life and Times of Jesus / Jesus, Miracles and Mercy
Reading Time: 3 minutes

The storms of life are not random, nor are they uncontrolled. Whether social, emotional or natural, the storms we face are given to us in order to wake us up from our slumber and draw us nearer to Jesus. As judgements, they are a merciful reminder of judgement to come, that we might flee to God for refuge.

In Mark 4 and 5, having finished a number of parables to the gathered crowd while sitting by the seashore in Peter’s boat, Jesus and the disciples head out into open waters.

The parable given just before these events is that of the mustard tree and the birds who nest in their branches. This parable reminds us that we ought not to be surprised by the presence of evil or the presence of opposition in the kingdom of God.

In heading out to sea and arriving on the other side, the disciples are confronted with both of these things

The storm at sea and the deliverance of the demoniac among the tombs in the Gadarene are filled with images we find in the Old Testament. They represent opposition, obstacles and even evil. In both events, Jesus is taking down the kingdom of darkness, as He said He would, and showing Himself to be Lord over both the natural and supernatural world.

The decision to leave for the other side of the Sea of Galilee is Jesus’ decision (Mark 5:35). They all get in the boat and while Jesus is sleeping a storm whips up, swamping the vessel. The disciples panic and go down to wake Jesus.

Jesus rebukes the storm and the terrifying waves suddenly become a glassy sea. Jesus then questions the faith of the disciples and asks them why they were so afraid. Baffled and befuddled about who Jesus must be if He can control the weather this way, they head on over to the other side of the sea, to the Gentile lands known as the Gaderenes (Gerasenes) in Mark 5:1.

This is not the first time we have encountered a sleeper in a storm. Jonah was also en route (albeit unwillingly) to Gentile lands and his mission was to serve a similar purpose. To bring about peace and a display of God’s goodness.

In both cases, the storms are an occasion for some questions about identity. Both Jonah and Jesus are confronted with the question, “Who are you?”

Throughout scripture, storms are representative of judgement (1 Samuel 2:9-10). And, like the storm that threatened Jonah’s mission, so Jesus’ mission appeared to be under threat by a storm. But in both cases, it turned out to be a threat swallowed up by mercy.

Like Jonah, Jesus would later be thrown into the deep for three days and, like Jonah, His death would have looked like a serious setback to the mission.

Storms seem exciting until they reach our door, at which point they seem like serious opposition or obstacles. And they are. But they are controlled opposition—something we are told to expect in life (Acts 14:22). 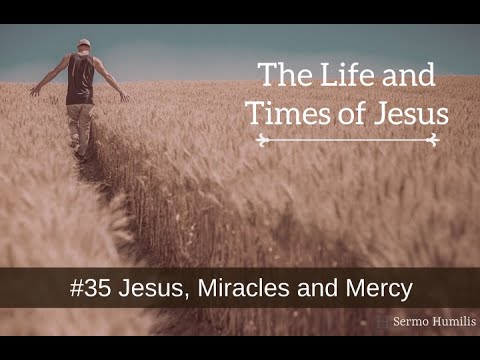 Here, we are reminded that God controls the weather (Psalm 107:23-28) and that storms are not obstacles to the mission, they are part of it.

Moving on, Jesus’ decision to cross had a singular purpose: to get into Gentile territory. Here he meets a man possessed by demons. He lives among the tombs and spends his day crying out and bruising himself with stones (Mark 5:5). We are also told that no-one was able to bind him.

Jesus turns up and delivers the unclean man by sending the legion of demons into a herd of unclean animals – pigs. The townsfolk all rush out and witness this man now sitting clothed and in his right mind.

Like the storm at sea, the deliverance of the man involved a transition from judgement to mercy. From chaos and disorder to peace.

While no-one else had been able to bind the strongman in this fellow’s life, Jesus could. And that is why He had come. Jesus came into the world in order to bring down the darkness that threatens human life, rest and joy.

The violence, calamity, chaos and climate change that mark both scenes are under the authority of Jesus.

Again, like Jonah’s mission into Gentile territory, Jesus comes to bring about mercy. And that is the purpose of our calamities. Like Joseph (Genesis 50:20), the calamitous circumstances of our lives are also a reminder that we serve a God who brings rest and relief from our bondage to sin.

In Psalm 107:28-29, and here, God is stirred into action by the cries of His people. That’s the point of the storm. To stir you and shake you out of your tomb so that He can show mercy on you.

That’s why Jonah didn’t want to go to Gentiles and that’s why Jesus did.

Jesus, Tough and Tender
Jesus, The Priesthood
Jesus, A Ransom for Many
Jesus, God's Delight

Judgement is easy. Mercy is a nightmare. Hating those who offend us

In the 20th century, being radical meant pursuing your lusts

When believers gather, we gather as a result of the death and