Hide Search
You are here: Home / The Life and Times of Jesus / Jesus, Our Anchor
Reading Time: 3 minutes

Joseph wasn’t just Joseph, nor Joseph the carpenter. He was Joseph, from the House of David.

By contrast, modern man is largely anti-historical. His concern is his immediate experience and much of his weakness of character in dealing with his experience is that it’s not anchored to anything.

His identity is entirely bound by the here and now. And so, when he loses his reputation, or his car, or his job, it is easy for him to conclude that his whole world has crumbled.

One of the reasons I point this out is that Luke, in writing to Theophilus (Luke 1:3-4), relies heavily on history in order to identify who Jesus is.

In an anti-historical culture, history is treated as a dull sideline. A curiosity perhaps, but not something to anchor your soul in.

For Luke, if the tender faith of Theophilus was to endure, it was going to have to be anchored in something beyond himself. And that something was the history concerning the man, Jesus.

In the sixth month, the angel Gabriel was sent from God to a city of Galilee named Nazareth, to a virgin betrothed to a man whose name was Joseph, of the house of David. And the virgin’s name was Mary. (Luke 1:26-27)

In identifying Jesus, Luke points out the importance of the messenger. Gabriel has been here before. His presence now is anchored to a visit he made a few hundred years earlier.

Gabriel was the angel who gave Daniel the timetable for the arrival of a Saviour (Daniel 9:21). His appearance now suggests that the time has come.

Elizabeth adds something to His identity when she meets Mary in the next passage and declares, “Blessed are you among women” (Luke 1:41-42).

Like Gabriel’s appearance, this expression is also anchored to an earlier event. It was penned by Deborah in the disco hit she wrote celebrating the time Jael ran a tent peg through Sisera’s head (Judges 5:24). 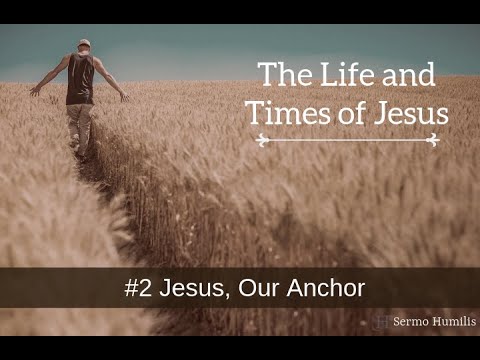 The allusion is obvious. Not only is Jesus the promised and historical Son of God Most High, but He is also the one who, through a woman, would put an end to our suffering by crushing the Serpent’s head.

The reason Luke lays such importance on the identity of Jesus is so that Theophilus might have an anchor, a certainty, about the things he had been taught (Luke 1:4).

Man rightly senses his own dysphoria; the distance between who he is and who he thinks he ought to be. This longing to have our identity affirmed and anchored is not incidental. It is what keeps us from spiralling into the oblivion of self-destructive despair.

The reason we can identify with Jesus and can find our true identity in Him is that He has already identified with us.

Jesus, born of the Spirit, born of a woman, born under the law, came into this world. He became one with us in our frailty, vulnerable to our temptations and susceptible to our pain. He joined us in our labour, our hunger, our friendships, our family and our loss.

He could not have identified with us more completely.

This is the gospel. That Jesus be formed in you: That your life be increasingly shaped by His life. That your identity be forever anchored in Him.

Mary shares in this identity and represents a vivid picture of the people of God in whom the life and identity of Christ now takes shape.

Today, it is virtually impossible to think about Mary without thinking about Jesus Christ and I wonder, can that be said of me?

What shapes your identity and your sense of who you are and what you are? In what or in whom is your life currently anchored? And what would happen if that anchor gave way?

May Jesus bridge the gap between who you are and who you long to be. And may you know what it is to find your soul at rest and anchored in Him.

Everything in creation bears witness to the character and nature of

The eighth commandment, 'Thou shalt not steal" upholds the rights to

It may seem odd at first that we should rejoice in judgement, but the

The problem with adultery is not that it's a betrayal of trust, not

In Proverbs 7, a father shares a story with his son. It's a simple

All of life is covenantal. For those unfamiliar with the term, a

When a man comes to Christ and starts to obey Him, it's not long