Hide Search
You are here: Home / The Life and Times of Jesus / Jesus, Salt, Light and Law
Reading Time: 3 minutes

A Disciple is one who is, and is becoming, the beatitude man or woman. Seeing nothing in himself worth defending, he has quit trying to build his own reputation as righteous and instead he is in pursuit of the righteousness that comes from God. He recognises this same emptiness in others and is merciful towards them, even toward his enemy.

God has purified such a man or woman from all malice, envy, greed and vengeance and has set it in their heart to make peace and bring others to Christ in order that they may know peace also.

And as we step out into the world with this new nature, we will be persecuted. Why? Because this new heart, given by God, has taught us to speak and act in a new way: As salt and light.

Salt has two basic functions. First, salt prevents corruption. Positively, it preserves or maintains purity. Sacrifices in the Old Testament were sprinkled with salt (Leviticus 2:13) as a symbol of purity, perpetuity and preservation.

Salt also gives food much of its flavour and taste, without which, such food becomes loathsome (Job 6:6).

Jesus then goes on to talk about light.

Light exposes the things that are in darkness. One of the ways that will happen is by living and working in such a way that reveals the futility or shame of the works of the world.

Positively, our good works are set forth as a light that reflects the goodness of God.

The rescue of abandoned infants in Rome by Christians is an example of this. Their good works publicly shamed the disgraceful practice of Rome’s unbelievers.

They did not aim to shame. They were aiming at love. One of the unintended consequences, however, was that it brought to light the shameful conduct of Rome’s unbelief. 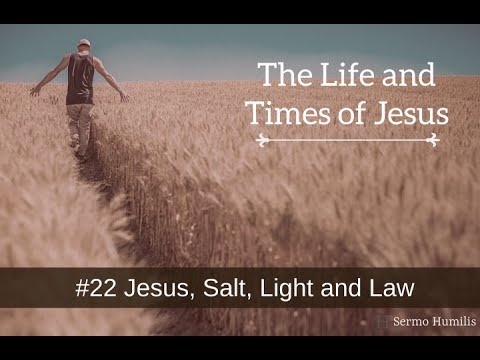 Having described the new nature of the believer as salt and light, Jesus goes on to talk about the law and the prophets (Matthew 5:17-20), but it’s not a new conversation. It’s a continuation of His teaching about how to live as salt and light.

To ‘fulfil’ should not be reduced to simply bringing something to completion. A married man doesn’t wake up the day after his wedding and say, “There, I have fulfilled my vows. Job done.”

On the contrary, now that he is married, he is obligated to fulfil his vows in a variety of ways for the rest of his life. To put it another way, having entered into marriage and made vows, he does not stop fulfilling them; he puts them into full force.

Likewise, when Paul says to Timothy, “…be sober-minded do the work of an evangelist, fulfil your ministry.” (2 Timothy 4:5), he was not telling Timothy to stop doing something but to keep doing something.

Now, it’s usually at this point that someone from the back of the room will turn to Romans 6:14 and shout out, “But we are not under the law. We are under grace.” Which is quite true. We are no longer under the condemnation of the law.

But that does not make us lawless. Law is inescapable. All of us have a standard for living out our lives. We have a standard operating when we give, and how much we give. We have standards for our marriage, the way we earn a living and more. The question is, which standard? For the believer, the law and the prophets continue as the guiding principle.

The picture of the new man or woman is that of a heavenly people (lights on a hill) who live and speak as the salt of the earth.

The beatitudes and the declaration that we have become salt and light are a comment about who we are in Christ.

They also carry with it our marching orders. We are called to bring truth and light into this world so that others may see Jesus, magnify the value of His sacrifice, and give glory to God as their Father in Heaven.

Jesus, Follow Me
The Courts of Mercy
Jesus, Seeing is Believing
Living as Free Men

Throughout scripture, faithfulness in marriage is presented as a

So that you don't miss the point, or the satire, or the sarcasm, let

Samuel is a book about small salvations that matter. It's about