Hide Search
You are here: Home / The Life and Times of Jesus / Jesus, Shaking Heaven and Earth
Reading Time: 3 minutes

In Matthew 5:17, Jesus tells the disciples that He came to fulfil the law and the prophets. He came to put them both into force, to accomplish their purpose, satisfy their demands and fulfil their expectations.

In the next verse, Jesus goes on to say,

For truly, I say to you, until heaven and earth pass away, not an iota, not a dot, will pass from the Law until all is accomplished (Matthew 5:18)

According to Jesus, before any change in the law can occur, heaven and earth must pass away.

Now, an observant reader might respond, “Hang on, didn’t Jesus change the law when He pronounced all foods clean? Didn’t Paul set aside circumcision?” Yes, they did. Which can only mean one thing, namely: Heaven and earth have indeed passed away.

How can this be?

When the bible is talking about heaven and earth as the physical, material world, the context tells us. For example, Genesis 1:1; Psalm 104:5; Ecclesiastes 1:4.

At other times the same language is used quite differently, especially among the prophets.

For example, when God established His covenant with Israel, He addressed them as heaven and earth (Deuteronomy 32:1) and described His work in setting up the covenant as, “establishing the heavens and laying the foundations of the earth” (Isaiah 51:15-16).

Later, in speaking of the judgement to come upon the kingdom of Babylon (Isaiah 13:1, 19), He used the language of de-creation saying that He would make the heavens tremble, and the earth shake (Isaiah 13:13). And when speaking of the destruction of Edom He said that, all the host of heaven would rot away, and the sky would be rolled up like a scroll” (Isaiah 34:3-5).

Each time, the context makes clear that what this cosmic language was describing was the beginning or end of a kingdom or covenant.

And so, as the time of Christ approached, God again spoke, this time through the prophet Haggai, saying,

Yet once more, in a little while, I will shake the heavens and the earth… (Haggai 2:6)

The book of Hebrews, a book all about the changing of the covenant from old to new (Hebrews 1:10-12) picks up on this and quotes Haggai 2:6 as confirmation that God was removing the Old Covenant to make way for the new (Hebrews 12:25-28).

In all these instances, God is not describing the physical universe, but the kingdoms and the covenants that were governing them.

And so, when the Jews heard Jesus speak about the passing away of heaven and earth, their ears would not have tingled with scenes from The Terminator.  Their understanding would have come from the words of their own prophets.

The birth of the New Covenant required the death of the Old Covenant. 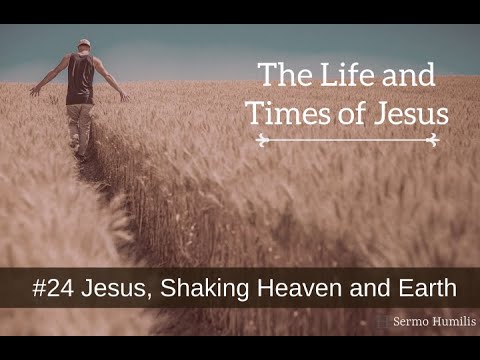 In the time of Jesus, that Old Covenant and its kingdom were coming to an end (Hebrews 8:13) as God gave the whole thing one last, almighty shake.

In Jesus Christ, the Old World went into the grave and the New World came out.

The resurrection was big. It was huge. Through the resurrection, a new heaven and a new earth, that is, a new kingdom and a New Covenant had burst forth into this world and is now established forever.

Does this mean we are now lawless? By no means. Jesus explicitly tells us He did not come to abolish the law and the prophets. He came to fulfil them. And, so, while the particulars may have changed, the grand principles have not (Romans 13:9-13).

Through His resurrection, Jesus has established a New Covenant. God has shaken heaven and earth and the world will never be the same.

Did you ever regret the absence of the burnt-offering, or the red heifer? Did you ever pine for the feast of tabernacle, or the dedication? No, because, though these were like the old heavens and earth to the Jewish believers, they have passed away, and we now live under a new heavens and a new earth. The substance is come, and the shadow has gone: and we do not remember it. (C.H. Spurgeon, 1865, on Isaiah 65:17. Metropolitan Tabernacle Pulpit, vol. xxxvii, p. 354).

And we are still commanded to gather for worship. Only now, it is not on the Temple Mount. Instead, a way has been made where we can ascend into the heavenlies each Lord’s Day (Hebrews 12:22-23).

Today, we are worshipping God as citizens of a New Jerusalem with ourselves as a new creation (2 Corinthians 5:17). And, like the rest of creation, we are being slowly transformed, renewed and redeemed until that day when Jesus will have perfected the lot.

Jesus, His Love for Us
Jesus, A Ransom for Many
Jesus, Tough and Tender
Jesus, In the Dock

The gospel calls us to maturity, to complete manhood. It's written in