Hide Search
You are here: Home / The Life and Times of Jesus / Jesus, The Priesthood
Reading Time: 3 minutes

After the resurrection of Lazarus Jesus moves to a place called Ephraim near Galilee. That takes us to Luke 17 where we find 10 lepers who were healed by Jesus.

Now, what usually happens with a miracle like this is that it gets reduced to a moral lesson on gratitude. Ten are healed of their leprosy but only one returns to give thanks to God.

For some, the moral of the story is, give thanks to God. Don’t be like those ungrateful lepers.

Yet, if we think about what Leprosy is; beggars without eyes, ears, and limbs, gurgling unearthly sounds through throats without palates, it’s hard to imagine that these nine lepers were not extremely grateful.

But the emphasis here is largely on the response of the one Samaritan leper and it’s his actions that help us understand the main point. The point being, that Jesus had come to provide all that the priesthood and the temple once provided. Jesus was the priest and the sanctuary to whom all men must come.

Then one of them, when he saw that he was healed, turned back, praising God with a loud voice; and he fell on his face at Jesus’ feet, giving him thanks. Now he was a Samaritan. (Luke 17:15-16)

God was the first priest, providing a sacrificial animal to cover the shame of Adam and Eve. From that point on, everything that the Old Testament attributes to the temple and the priest and the altar of sacrifice is now true of Jesus. Jesus is where the glory of God rests.

Jesus is the “House of God”, the place where heaven and earth connect and a place of joy, restoration, and mercy.

He is the only place where sin is atoned for and where reconciliation and salvation are offered.

These are the functions of a priest. To mediate between men and a higher power. To cover and absolve the guilty.

Israel was a “kingdom of priests” (Exodus 19:6) and was brought near to “stand and serve” (Deuteronomy 10:8; 18:5) as stewards in God’s House. They were sacred butchers, butlers, and bakers and when they burned incense on the golden altar, they were offering intercessions (Psalm 141:2). 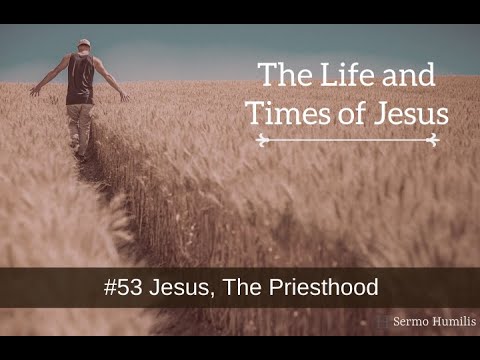 This pattern continues under the New Covenant where Christians became priests in Christ. And so,

You also, like living stones, are being built into a spiritual house to be a holy priesthood, offering spiritual sacrifices acceptable to God through Jesus Christ. (1 Peter 2:5)

To be a priest means to be a priest for someone. This was a key issue during the reformation. Luther wrote in a preface to the Psalter,

“The fact that we are all priests means that each of us may go before God and intercede for the other, If I notice that you have no faith or a weak faith, I can ask God to give you a strong faith.”

This means that every Christian is someone else’s priest, and we are all priests to one another. And, because there is a true priesthood, you will also find an antithesis: a false priesthood.

These counterfeits offer all the same services. They wash away guilt, declare righteous and unrighteous, offer justification, and more.

The secular psychologist who responds to the adulterous woman with, “You were lonely, you were in need of love, it’s not your fault”, is acting as a priest. He is providing the comfort of absolution and justification for sin.

The psychiatrist who pops a lithium wafer into the mouth of the lazy man kneeling before him is acting as a priest.

Such are our attempts to establish a priesthood apart from Christ.

If you wanted to be declared clean from leprosy and acceptable to God in the Old Testament you had to go to the priest and He would examine you and declare you clean (Luke 17:14). Now you come to Jesus.

If you wanted to be reconciled with the people of God you went to the temple and there you offered sacrifices of praise and feasted with God. Now you come to Jesus and are given bread from heaven.

Back then, if you needed to fall on your face and plead for mercy in the presence of God you turned to the temple. Now you turn to Jesus.