Hide Search
You are here: Home / The Life and Times of Jesus / Jesus, Thy Kingdom Come
Reading Time: 3 minutes

And at the centre of that centre is a conversation between Jesus and Pilate. In John 18:36, Jesus tells Pilate that His Kingdom is not from this world.

Then Pilate said to him, “So you are a king?” Jesus answered, “You say that I am a king. For this purpose I was born and for this purpose I have come into the world – to bear witness to the truth. (John 18:37)

Jesus has been sent as a true witness of a Kingdom that has come into the world.

We don’t think in terms of Kings and Kingdoms these days, but in the time of Jesus, that was all they knew. Because of this, when we read about Kingdoms, we tend to think in terms of some spiritual experience or activity going on inside the heart.

On this take, Christianity is a religious practice inside – or side by side. It’s something going on inside my heart and mind, or something that exists alongside other religions in the public arena.

But Jesus’ Kingdom is not a sect within an empire. He was not sent to take some fisherman into the forest.

A kingdom in Jesus’ time was not a nation and it was not a religious sect. It was an all-encompassing empire that consumed and incorporated and assimilated all other ethnic, geographical, political and social interests.

A kingdom sought one thing and one thing only: Dominion.

And so, when Jesus stands before Pilate, the discussion about kingdoms is not about making room for a spiritual group that will co-exist alongside other sects.

The discussion is about dominion.

It’s not a Kingdom that has arisen upon the earth, but a Kingdom descending from heaven and it’s purpose is total rule. 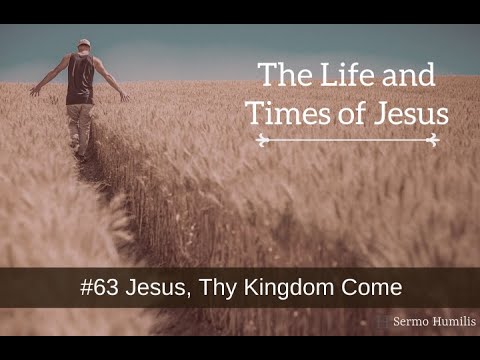 And so we read that through the death, resurrection and ascension of Jesus,

The kingdom of the world has become the kingdom of our Lord and of His Christ, and he shall reign forever and ever. (Revelation 11:15)

Empires allow for no rivals. Pilate can remain calm because Rome has total rule. He is not concerned about an overthrow from a Jewish carpenter.

This is why the Jews approach the problem of Jesus with Pilate the way they do when Pilate offers to release Jesus.

..but the Jews cried out, “If you release this man, you are not Caesar’s friend. Everyone who makes himself a king opposes Caesar.” (John 18:12)

Empires cannot co-exist. So you have to make a choice.

You can assume the reign of Caesar, sit on your hands, wade out life under Caesar until Jesus comes to fix everything, or you can bear witness to the truth.

Bearing witness to this truth is what Jesus has been doing and it’s what He has called His disciples to do. And that’s what got Him, and His disciples, into so much trouble.

We bear witness that God has sent His Son Jesus into the world and given Him all authority in Heaven and on Earth.

This is why we do not petition Caesar for our daily bread. Our letters and our petitions are written in prayers to the Father through Jesus.

We are bearing true witness that Jesus Christ is King, and we are urging others to recognise it. As ambassadors, we are instructing the world to obey all that Christ commands.

Knowing what Caesar is like, we may very well tremble at the task before us. But then again, knowing what Jesus is like, we are freed from the spectacle of becoming compromising thumbsuckers and evangelical bedwetters.

We of all people ought to have confidence. But it is not self confidence. Jesus is Lord. In Christ, we have citizenship to an everlasting kingdom. An unshakable kingdom. We have access to a King and a Kingdom that will still be standing when the schemes and pandemonium of this world come to nothing.

Jesus, The Harvest
Jesus, A Fisher of Men
Jesus, Compassion
Jesus Among the Pick 'n Mix

Honour is basic to the longevity of any society. In the 5th

While the sin of Adam in the garden was a one-time event, the mudslide

Many of us have complained at some point about being too busy. Jesus