So, here we are in Jericho. Herod the Great, who slaughtered Bethlehem’s boys during Jesus’ childhood died here. After his death, a conflict erupted over who should take the throne in his place.

None of the choices was good. Archelaus, the front runner amongst his brothers, was particularly disliked. During a Passover celebration in the same year that Herod died, Archelaus responded to those who objected to his claim to rule by slaughtering 3,000 Jews.

Because Archelaus needed to secure Rome’s approval to be crowned king, he travelled to Rome to meet with Caesar.  However, he wasn’t the only one heading for Rome. A delegation of fifty Jewish diplomats opposed to Archelaus was also sent to Rome to petition Caesar against electing this bloodthirsty villain as their king1.

All of this would have been ringing in the ears of those sitting around the table at the house of Zacchaeus as Jesus delivers his final parable before his death.

A nobleman went into a far country to receive for himself a kingdom and then return. (Luke 19:12)

Luke 19:11 tells us that the people hanging out at Zacchaeus’ repentance party were under the impression that the kingdom was about to appear. It was this belief that prompted the parable.

Jesus was heading for Jerusalem, a place promised to the Jews but currently overrun by Romans and the Jews had just heard that deliverance had come to a son of Abraham (Zacchaeus).

In Genesis 22, God had promised that the sons of Abraham would possess the gates of their enemies (Genesis 22:17).

And so, the people get it into their head that Jesus is going to go up to Jerusalem in order to kick some Roman butt and reclaim the city for Israel.

But when Jesus does enter Jerusalem on a donkey in the next passage, He doesn’t head for the Antonio Fortress, He heads straight for the temple to kick some Jewish butt (Luke 19:45-46). 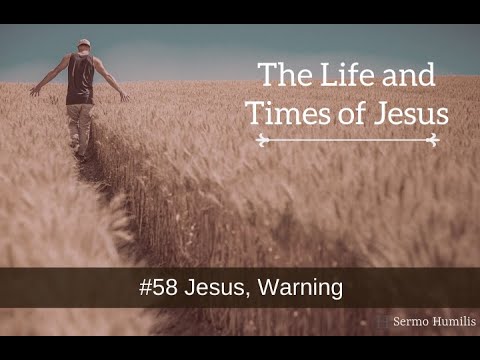 The main players in the parable are the nobleman, his servants and the local citizens.

The nobleman’s servants are given the responsibility to make money for him while he is away.

But his citizens hated him and sent a delegation after him, saying, ‘We do not want this man to reign over us.’ (Luke 19:14)

Is Jesus pitching Himself as the nobleman? I don’t think so.

It seems more likely that Jesus is bringing the recent events of Archelaus to mind and that the parable is a warning to Israel. What happened in the days of Archelaus was going to happen to them if they didn’t stop thrashing against Rome – something that had already lead to a growing pile of Jewish bodies.

But as for these enemies of mine, who did not want me to reign over them, bring them here and slaughter them before me. (Luke 19:27)

Jesus doesn’t come into town with a sword as Archelaus did. Instead, Jesus comes in tears (Luke 19:41-44). His ministry had not been about, “slaying His enemies”, but about, “seeking and saving the lost” (Luke 19:10).

Moreover, it was not the servants who are killed for mishandling finance but the citizens.

By consciously bringing up recent history, Jesus seems to be saying, “You’ve been down this road before and it did not end well. The truth is, you don’t want anyone to reign over you. Your rebellion runs deep.”

The parable foreshadows a judgement but it’s not Jesus vs. Rome. It’s Rome vs. the Jews. Rome is going to execute God’s judgement on a citizenry who has rejected their king.

I tell you that everyone who has will be given more; but the one who does not have, even what he has will be taken away from him (Luke 19:25)

Israel’s rebellion against Rome and the subsequent slaughter, which did, in fact, come to pass, is a shadow of where you are headed fully and finally when you reject the King of Kings.

But first, and this is embedded in everything that Jesus has been saying about Himself, first, there will be another slaughter.

There will be a Son of Abraham, an Isaac, who will be stretched out on an altar of wood and slain.

In giving this parable and then going up to trash the Temple, Jesus is not only forewarning Israel of their slaughter, but He is also setting up His own.

To those like Zacchaeus who welcome the king more would be given. But to those who have not and would not receive His Kingdom, even what they had will be taken away.

And what was true then, is still true today.

Jesus, From Feast to Fury
Jesus, A Victory Tour
Jesus, Numbering Our Days
Jesus, A Ransom for Many

Just as the purpose of education is not to get a job, but to walk with

Hypocrisy is a nagging sin. It's subtle and it is sinister, often

We live in an age that resembles the book of Judges. If

D.A. Carson once said that students do not learn everything you teach