Hide Search
You are here: Home / The Life and Times of Jesus / Jesus, What Money is For
Reading Time: 3 minutes

God has entrusted us with various things: Sheep, sons, and coins, among others. The issue is not the value or amount of those things we have been given, but the one to whom we must give an account for our use and care of those things.

In Luke 16 we are still at the dinner table. The Pharisees, to whom Jesus has been speaking, were entrusted with the law and its application in Israel, and in the parable of the dishonest manager were now being called to give an account.

There was a rich man who had a manager, and charges were brought against him that this man was wasting his possessions. (Luke 16:1)

Like the Pharisees, the steward in this parable has been feather-bedding. He was looking after his own interests and that has resulted in him squandering the things entrusted to him by his master.

Likewise, the Pharisees had become like the shepherds we read about in Jeremiah (Jeremiah 50:6) and Ezekiel (Ezekiel 34:2). Shepherds who had made themselves comfortable and neglected their duties to the sheep.

The sheep in the parable are represented by those whose circumstances were crushing them.

The religious leaders in Jesus’ day were binding heavy burdens on the backs of the people. They multiplied laws, robbed widows and made the way hard.

Now, Jesus was calling all of them to evaluate their situation very carefully. Time was running out.

Knowing his time is short, the steward goes out to make some deals with those in debt to his master. He offers to reduce their debt, hoping that such a favour would be repaid with a home to go to when he is kicked out of his master’s house.

I have decided what to do, so that when I am removed from management, people may receive me into their houses (Luke 16:4)

The master commends the steward on his shrewdness. He used money as a lever to gain favour with others.

As an application of this parable, Jesus then tells the disciples,

…make friends for yourselves by means of unrighteous mammon, so that when it fails they may receive you into eternal dwellings (Luke 16:9)

Nothing wrong with a little feather-bedding. It’s shrewd. The question is which bed you’re trying to feather. 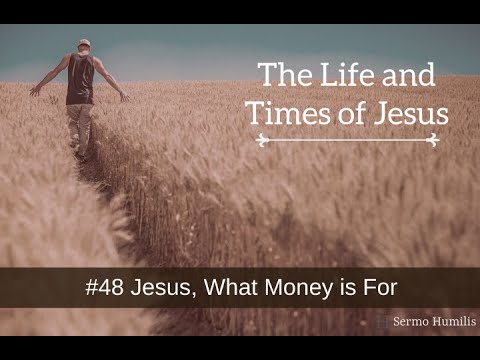 And how do you feather-bed for the future? By seeing this world’s goods as an opportunity to extend mercy to others. To lighten the load for others.

…summoning his master’s debtors one by one, he said, “how much do you owe my master?” He replied, “A hundred measure of oil”. “Take your bill, and sit down quickly and write fifty” (Luke 16:5-6)

Jesus warned that if they couldn’t get this right, they would not be entrusted with the true riches of heaven. Instead, that trust would be given to a new people and the unrepentant would be left outside the banquet, much like the elder son of the prodigal.

This understanding of repentance is crucial. The fruit of repentance (the evidence that God has turned your heart) is not some mystical feeling. You can point to it.

This means generous dealings, not just honest dealings. It means you pay your rates with one hand while buying a blanket to keep your mum warm with the other. (Matthew 15:5)

The steward, wicked though he was, is shrewd because he knows what money is for.

Money is not given to be worshipped or hoarded. Money is to be used to befriend others. The question is, what kind of friends are we trying to make?

Jesus takes the wealth and glory of the Father and does what? Pours it out on His friends. He does it at the cost of His own life. He does it to make love visible and to make our eternal home with the Father a certainty.

Suppressing the truth doesn't come without effort. Our attempts to

Like the tabernacle in the wilderness, our world is patterned after a