Hide Search
You are here: Home / The Life and Times of Jesus / Jesus, When We Die
Reading Time: 3 minutes

In Luke 16:19-31, we meet two men. The rich man in this event was an idolater. He knows who God is but he suppresses it with cheesecake, leg ham and satin sheets.

At death, he finds himself in Hades awaiting a final judgement. The other lad, a man called Lazarus, also dies and goes down into Hades to be with Abraham.

Separating these two men in the belly of the earth, but within ear-shot, it would seem, is a great chasm (Luke 16:23).

The man, tormented by flames, calls out to Abraham and asks that Lazarus be sent to dip his finger in water, duck over to the other side and cool his tongue. Abraham replies that the chasm between them is too great.

Abraham also reminds the rich man that he had it good while he was alive, while Lazarus, a poor man covered in sores, had to pick up the cheddar that fell from the rich man’s table.

He then asks if Lazarus could be sent to warn the rich man’s brothers of this terrible fate, to which Abraham replies that they have Moses—listen to him.

From this event, it would seem that those who are judged and condemned by God in the next life will not suddenly come to their senses and repent. Instead, their hearts just become more self-sorbed (Luke 13:28).

But the more basic point of the story is this: God had sent Israel witnesses and they were not believed. And having rejected the messenger, they were not likely to accept the reality—even if that reality rose from the dead! (Luke 16:31)

In giving this account, Jesus also gives us some insight into what the after-life was like before His own death, and what His death would mean to those who lived and died prior to His resurrection. 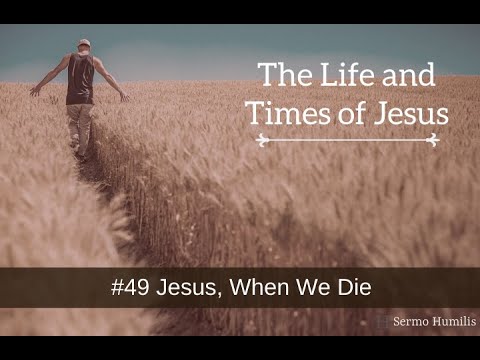 Jesus tells us that the man was in Hades. This is sometimes translated as hell and unfortunately, both words are often collapsed into something along the lines of the lake of fire (Gehenna). But this is not the meaning of Hades.

Hades, from Greek mythology and synonymous with the Old Testament word, ‘Sheol’ (Psalm 16:10 Acts 2:27), was a place located within the earth where people, both good and bad, went after death.

Jonah spent three days there (Jonah 2:2), David, foreshadowing the resurrection of Jesus, expected to go there, but not stay there (Psalm 16:10) and Samuel came up from there to give Saul a piece of his mind  (1 Samuel 28:14-15).

In Greek mythology, this underworld was separated into two areas. One called Elysium (a paradise) and the other Tartarus, a place of torment.

Jesus was not at all squeamish about appropriating such mythological language and applying it to reality.

We see the Apostles doing the same thing. Logos and Theos are straight out of Greek Mythology and John happily takes the terms and applies them to God the Father and God the Son (John 1:1-3).

What shocked John’s listeners was not that Logos was God. The Greeks knew that the Word created the world. What stunned them was John saying that the Word was a person. That the Logos became flesh!

So, here we have Lazarus and the flammable rich guy both in Hades. One in Elysium, one in Tartarus.

Peter uses the word Tartarus in 2 Peter 2:4 as the temporal home of disobedient spirits. It was also the place Jesus went in order to preach the gospel when He died (1 Peter 3:19).

Paradise, Elysium, an “Eden” (cf. Ezekiel 31:15-18), was a place of stillness, inactivity and temporary rest (Psalm 6:5). No coming and going, just stillness. And when Jesus told this story, Lazarus was in it.

And it was down to Paradise that Jesus promised to take the repentant thief on the cross (Luke 23:43).

And it was up from Paradise that Jesus took the saints when He rose from the dead.

I shall ransom them from the power of Sheol; I shall redeem them from Death. O Death, where are your plagues? O Sheol, where is your sting? (Hosea 13:14)

Not only did Jesus Preach to Tartarus, He ransacked Paradise and sent it up (2 Corinthians 12:2-4).

What Changed? The resurrection happened. Jesus rose and when He ascended He took Paradise and its occupants with Him (Ephesians 4:8-10).

And what Did all this accomplish? Philippians 2:8-11 tells us that by His descent into Hades and His ascension into Heaven, He filled the universe with His unshakeable Lordship.

And so, if we die today we will go to Heaven; Paradise. And we will rest there until the day we are clothed with new bodies and return.

A servant of the gospel has a simple task. Shepherd the flock that is

The storms of life are not random, nor are they uncontrolled. Whether

I know a Christian man with a wife and kids. He had the opportunity to

Looking at artist's impressions of the bear attack in 2 Kings 2,