Hide Search
You are here: Home / The Life and Times of Jesus / Jesus, Who’s Out, Who’s In
Reading Time: 3 minutes

Sinners have obstacles to God. They have nothing to commend themselves to God. But in the gospel, men like the rich young ruler and the Pharisee who have it all, have it worse, for they have no room for God.

In Luke 18 we learn that it’s the weak in society who are being welcomed into the kingdom and the strong who now face potential exclusion.

Let the little children come to Me and do not hinder them, for to such belongs the kingdom of God. (Luke 18:16)

Children, limited in understanding and small in stature are going to enter in more easily than those with a head full of man-made, culturally bound traditions and a preoccupation with money.

Most cultures have a poor history when it comes to the preservation and welfare of children. Israel is one of the few nations that have taken to eating their young. And before we get indignant or mortified by that, we should remember with shame that we live in a culture where 25% of the future population is being cut down each year before they are even born.

And as an aside, but completely in line with the whole concept here of who is out and who is in, my even mentioning that fact puts me on the out, even among some believers. Why? Not because they recoil at the sin, but because they feel awkwardly uncomfortable that I should bring down the tone of the party by mentioning it.

Sadly, our discomfort is not at the wickedness – which is where it ought to be – but in the decisive tone.

Here, in Luke 18, some little ones have come onto the scene. Somebody carried them or held their hand in order that Jesus might touch them. The disciples, being men of their time and bound by cultural norms, rebuke these mums and dads.

And, though it would embarrass the disciples, Jesus rebukes these self-appointed guardians publicly. 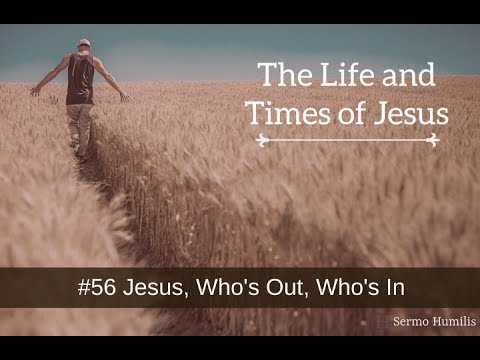 We live in a similar time. We believe that Jesus loves the little children. True enough. But at the same time, many worry that if the kids get too close to Jesus, and especially take a seat at the table, Jesus might zap ’em for their infant ignorance.

On that score, the disciples are better than us. They at least try to keep the kids from bugging the reality. We fear the kids might get the rough end of the stick for getting to close to the shadow.

And I notice that these kids weren’t making their own way to Jesus. They were brought. A responsible, God-fearing parent will be doing just that. Bringing their children to Jesus.

Not because the children have it all figured out but because Jesus has figured it all out and invited them in.

Next on the scene is the rich young ruler who wanted to know what he had to do to inherit eternal life (Luke 18:18).

Money is a powerful motivator. It brings tidings of comfort and joy, comfort and joy. We look at a cool million dollars and begin to think of all the possibilities. We do this because our vision is small, our wonder is weak.

In the Gospel, Jesus looks at a handful of uneducated fishermen, a repentant prostitute, and a tax collector, and thinks, “Hmmm, just imagine what I could do!”.

The problem of this young ruler is obvious. His bloated bank account simply wouldn’t fit through such a narrow gate and he is not willing to give it up (Luke 18:23).

That gate is death. When Jesus bids a man to follow, He bids that man to die.

In the world, children are to be seen and not heard. In the Kingdom, children get to lay hold of Jesus as He lays hold of them.

In the world, the sinner and the tax collector are rejected from popular society in favour of those who are full, prosperous, and popular.

In the Gospel, these same sinners are the kinds of people Jesus enjoys having dinner with.

In the world, the blind, the lame, the leprous, are people to be avoided and isolated so as not to bring down the tone of the party. In the Gospel, they are the very people who, recognising that they are destitute, are welcomed to the Supper of the Lamb.

Suppressing the truth doesn't come without effort. Our attempts to

In a recent interview, Journalist Walter Kirn told a story that says a