What do you tell yourself when you see so little goodness in the world around you? You tell yourself that this woman knew her business. Sorry, but the leaven is in and the loaf is rising. The Kingdom of God is growing and resistance is futile. The God of Daniel Lives (Daniel 2:34-35).

Those who take leaven in this parable to be a form of corruption and sin have a lot of material to work with. This is the predominant meaning in scripture. But the use of leaven as something good is also present in scripture.

For example, the Peace Offerings of Thanksgiving, a fellowship meal that followed the offerings for atonement, were to be offered and eaten with leavened bread. Leavened bread was also required at the Festival of Pentecost 50 days after the Day of Atonement.

He told them another parable. “The kingdom of heaven is like leaven that a woman took and hid in three measures of flour, till it was all leavened.” (Matthew 13:33)

Given the emphasis in the other parables in Matthew 13, which is the growth of the kingdom, in spite of and alongside, an anti-kingdom, I take the leaven in this parable to mean something good.

The Gospel is Potent

The point of leaven is not it’s intrinsic goodness or evil, but it’s potency, as we shall see.

How much flour are we talking about in this Parable? Three measures of flour is approaching a bushel, so we are talking about 60 pounds of flour. This is not mum backing a plate of muffins. This woman is a serious baker.

Gideon made this much bread for the Angel of the Lord. Hannah brought this amount of flour up to the Tabernacle when she offered Samuel there. This is also the amount offered in Ezekiel 45:24.

But the very first mention of bread-baking is in Genesis 18:6. On this occasion, Abraham serves up 3 measures of flour for bread, tender calf, butter, whole milk.

Abraham did not serve the Lord some low-fat hipster bread peppered with Ponderosa bark. According to the food-nit-picker-and fusser brigade, Abraham is trying to give his three heavenly visitors a heart attack!

In reality, such a meal represented thanksgiving and feasting with the Lord.

Leaven is mysterious, impossible to extract. Birds may pick up the seeds that fall on the path, but there is no way they can extract the leaven from the loaf. Once the leaven, the yeast, is in, the thing is done and all that is required is time. 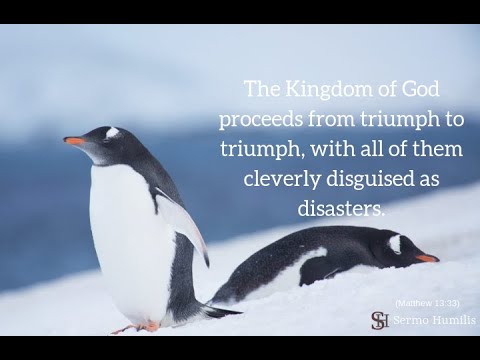 This idea of small beginnings and enormous results bothers some people, including many Christians. It is surprising the number of commentators who wish Jesus had not said this. They wish someone had turned off the mic.

“Oh, yes, He said that the Kingdom would be huge, that it would fill the earth, but he didn’t mean it, literally.” Or, “Well, yes, He did say that, but it was contingent on people and budgets co-operating with His plan, which they have not done, so we are moving to plan B.”

This is why, at least for Protestants, the Reformation is remembered with such fondness. At the time of the Reformation, the Reformers did not walk to their churches past great big statues of themselves. They were not there yet.

At the time of the Reformation, the kingdom appeared almost dead in the water. Clouded with mystic, magic and ritual, it was hard to see any way forward. Never-the-less, the yeast was in the dough, and though imperceptible at first, it was rising.

This is the way of the Kingdom of God. As someone once wisely observed,

The Kingdom of God proceeds from triumph to triumph, with all of them cleverly disguised as disasters, beginning with the greatest of them, the crucifixion.

At the time of the Reformation, the reformers were nobodies. And when they become somebodies, they were hunted. Prices were put on their heads.

Never the less, they kept singing. They kept sowing. Luther describes the Christian as a solitary songbird, sitting on the rooftop and warbling his little song.

This is our task, and it is simple. We put the leaven in the loaf and stand back. We sprinkle our conversation with the potency of the Gospel in all its humble truth – the whole counsel of God in the whole of life.

And then we watch and pray and give thanks that this baker knew her business. The Kingdom of God is spreading throughout this lump of a world. And just like yeast, though often imperceptible to us, the bread is rising – and its fragrance is filling the earth.

Credit goes to Doug Wilson at Christ Church, Moscow Idaho for the insights into this parable.

How do you maintain hope, joy and desire when you are staring down the

One of the basic temptations people have when talking about cultural

Man, being made in the image of God, cannot live without a mediator.