Christianity is a Public Religion. The world wants to legislate that religion be made a private affair. But, if the world had wanted the church to keep quiet about Jesus it should have thought of that before it crucified Him publicly.

The death of Jesus was a public event. He did not die in His sleep nor was He murdered in some back alley. He was crucified by those afraid of who He might be.

In between the crucifixion and the eventual death of Jesus, there were two odd events in Mark’s Gospel tucked between them. One was the darkness from noon till three and the other was the tearing of the temple veil.

In the Bible, darkness provides for two opportunities.

For most people, the common thought is that of evil. This makes sense since that’s when evil people do their evil deeds – under cover of darkness (John 3:19).

In the Gospel, Jesus’ betrayal, arrest and trial all happens under cover of darkness.

But darkness is also an opportunity for something wonderful. In the providence of God, what is sown in darkness becomes the occasion for transformation and triumph, of life over death.

Darkness gives the illusion that nothing is happening.

In the world, the wicked use darkness in order to conceal their wickedness, but in Jesus, the darkness becomes the setting for God to do something extraordinary. 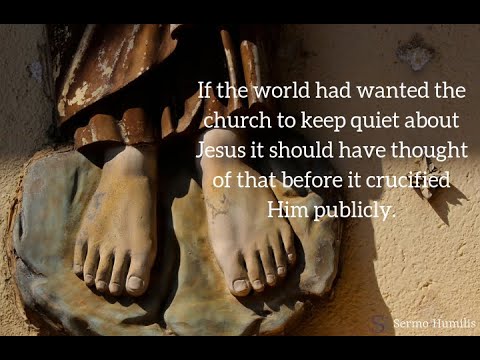 The other strange thing that happens is that the temple curtain is torn in two.

There is a link here between the tearing of the temple veil, Jesus’ trial the night before and what was to happen next for the centurion who is standing there watching the whole thing.

The night before, at Jesus’ trial, the High Priest tore his robe in a fit of rage (Mark 14:63). This was explicitly forbidden by God in Leviticus 10:6. It disqualified the High Priest (and conveniently created a job opening).

Without windows or candles, the temple was illuminated only by the light of God’s presence and separated by this heavy curtain. The curtain is torn from top to bottom at about the same time that the sun returns and begins to shine again (Mark 15:33-39).

The immediate consequence of this shift from darkness to light, which has been occurring throughout the crucifixion, is the confession of the centurion who declared, “Truly this was the Son of God”.

We are taught elsewhere that the tearing of the veil means that we can now enter into God’s presence. In Mark’s account, however, we are shown something else.

In Marks Gospel, man is not seen entering in. Instead, God is seen stepping out from behind the veil. And where can He be found? On a cross.

The light of the world is now in full public view as Saviour of the World.

The world, in league with the devil, has done everything it could to hide the Son of God from public view.

As someone once said,

They gave it their best shot – in vain.

The world wants to keep Jesus in the dark. But He can’t be kept in because He wasn’t forced in.

Jesus laid Himself down in the darkness, and when He was ready He drew back the curtain and walked out, bringing you and me with Him.

When China closed its doors to western missionaries for 40yrs it was not because Jesus had slipped and fallen into the tomb. He stepped in and while hidden behind the bamboo curtain He saved 50 million Chinese.

And when the time came, He rolled away the stone to show the world what He had done. So too, our lives are to bring into clear focus the work Jesus has done in the world and continues to do in us.

If there are times when God seems to have let us slip into seasons of darkness, it is not because we have been abandoned to the grave. No, Jesus has stepped in with us and is doing something awesome in the dark.

And when He is finished He will roll away the stone to show the world what He has done.

Another year over and most of us are talking about the year ahead. But

Judgement is easy. Mercy is a nightmare. Hating those who offend us

In John 5:1-14, Jesus, having completed a tour of Galilee, returns to