Hide Search
You are here: Home / Just a Thought / The King Has One More Move
Reading Time: 2 minutes 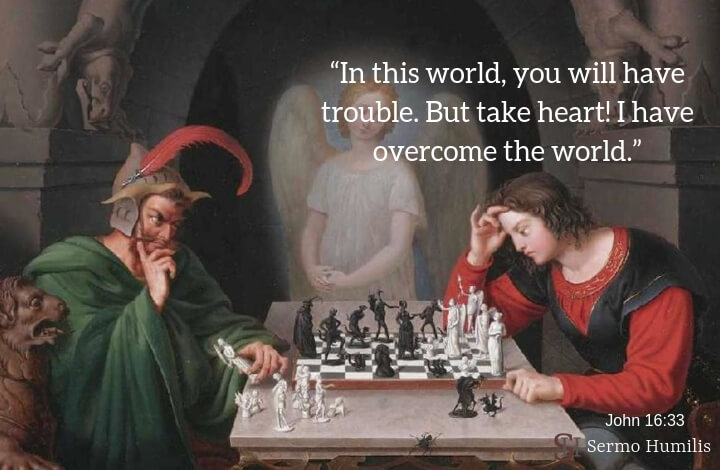 Two men are walking through an art gallery admiring a famous painting by Friedrich Moritz August Retzsch called, “Checkmate”. In the painting, a man is playing chess with the devil. The devil is grinning ear-to-ear because he has the man cornered.

The title of the painting, “Checkmate,” indicates that the game is over. The devil has won. His opponent has no more moves.

The first man looking at the painting wants to move on to other paintings in the gallery. But the second man, an international chess champion, wants to look at the painting longer, so he waves his friend on and tells him he will catch up later.

The chess champion stares and stares at the chessboard, then suddenly steps back, flabbergasted. “It’s wrong!” he exclaims. “There’s one more move.” He runs to his friend and together they look at the painting.

“We have to contact the painter,” the chess champion says. “It’s not checkmate. The King has one more move!”

Nietzsche, Randi, Harris, Lennon, Stalin, Gervais, Jimmy Carr, Dawkins, Hegel and Bertrand Russell. What do all these famous thinkers have in common? They all predicted or announced the death of God or Christianity.

This is nothing new. Ever since Adam bit the apple our world has had those willing to stand up and declare some kind of victory.

But such bold statements have never bothered the Church or the Christian. Why?

Of all the people who should be freaking out and drowning their sorrows in inebriating and mind-numbing intoxication, it should be those who have a firm and fixed belief in the terrifying realities laid out in the Bible.

Realities that affirm that we live in a dangerous world, that we are vulnerable, frail and weak, and that we die. Realities that also affirm the final judgment and an eternal afterlife.

And yet, such people are among the happiest, healthiest people. They also tend to enjoy the longest lifespan and are less likely to flounder in destructive escapist lifestyles or final despair than the general population.

Add to that the fact that followers of Jesus are among the world’s most persecuted people group, and one wonders how they even get out of bed.

Faced with the same real, everyday problems as everybody else in the world, and then some, the Christian man or woman continues to stand and flourish. How is this possible?

“Checkmate”, said the scribe to the Pharisee as they watched Jesus, the King of the Jews breathe His last on the cross outside Jerusalem.

But the King had one more move.

The Gospels are full of accounts of Jesus teaching, healing and giving

Satan was the direct actor in the calamity that cut down Job. Job knew

One of the basic temptations people have when talking about cultural

John's Gospel was written during a time of great persecution.  It was