Hide Search
You are here: Home / Who we Are Instead / Weakness is the Way
Reading Time: 3 minutes

Nobody wants to be called weak, at least, not by the world’s definition. The world despises the weak and has a habit of crushing them. There is a weakness that can get you crushed. But it is a weakness that’s worth having.

When God visited His people on the mountain at Horeb, He did it with peels of thunder, fire from Heaven and a terrifying voice. The people panicked and asked God to come up with another way of communicating. So He did.

The Lord your God will raise up for you a prophet like me from among you, from your brothers; it is to him you shall listen; just as you desired of the Lord your God at Horeb on the day of the assembly, when you said, ‘Let me not hear again the voice of the Lord my God or see this great fire any more, lest I die.’

And the Lord said to me, ‘They are right in what they have spoken. I will raise up for them a prophet like you from among their brothers. And I will put my words in his mouth, and he shall speak to them all that I command him. (Deuteronomy 18:15-18)

The people didn’t want thunder from heaven. They wanted someone like themselves.

So, God sent them a man they could relate to. But to their dismay, this man said pretty much the same things that had been thundered from the mountain.

But he also walked the streets healing the sick, talking to fishermen, eating with sinners, weeping over the death of friends and blessing the little children. And they didn’t like that.

That was Jesus. He came in the weakness of an ordinary man willing to surrender Himself for the sake of others. He was tender and they didn’t like that at all.

God had warned them that when He came, they must be careful to listen to Him. They didn’t. They wanted someone who would thunder at Rome – not Jerusalem. But Jesus wouldn’t.

For he grew up before him like a young plant, and like a root out of dry ground; he had no form or majesty that we should look at him, and no beauty that we should desire him. (Isaiah 53:2)

And so, the people didn’t listen and they didn’t like Him. By this world’s measure, Jesus was a weak man. 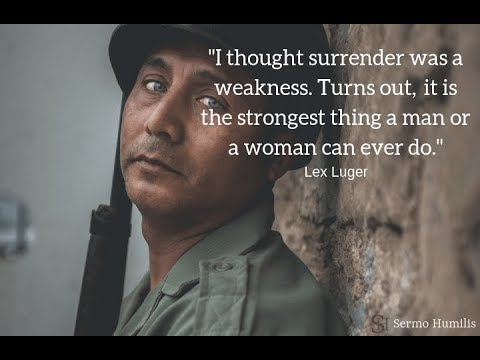 The God at Horeb they could hear but not bear. God en-fleshed in meekness and lowliness they would neither hear nor bear. “Depart from me Lord, for I am a sinful man.”

They found the kindness and patience of Jesus intolerable. They found His apparent weakness and gentleness an insult.

Jesus didn’t call down fire from Heaven – He healed with his hands. He didn’t slay the wicked or the adulterer – He lifted them out of the pit. He didn’t fight Rome but surrendered Himself to Rome’s cruelty.

Jesus knew what whips were for but chose to take the lashing. He surrendered to the taunts and the torture in weakness. And when He was done, He rose from the dead.

You can see this in the many church services and concert halls that attempt to imitate the God of Horeb with strobe lighting and a smoke machine.

For many modern Christians, the power is not in the blood, it’s in the beat.

James and John were hoping He would call down a little fire from the sky. But He didn’t. Jesus could call on a legion of angels and Peter might have been delighted.

But Jesus didn’t. Jesus was crucified in weakness (2 Cor 13:4) so that He might live forever by the Power of God.

This is the power we are called to share in. Power clothed in weakness.

I borrowed the text for my image from J. I Packer’s book of the same name. It’s a good book and worth the read. You can find it on Amazon.

The Road to Jericho
Live Not By Lies
Jesus, Our Anchor
The Politics of Envy

Mourning and grief over loss are universal experiences. And even