Hide Search
You are here: Home / Life in Christendom / What’s Yours is Mine
Reading Time: 3 minutes

The point of the biblical emphasis on God’s ownership of the earth is that all property must be held in accordance with His commands. Property will always be owned and the commandment, “Thou shalt not steal”, implies the right to private ownership.

God’s claim on the earth means that everything I have must be owned in terms of His requirements. My limited ownership is governed and granted by virtue of His total ownership.

The earth is the Lord’s, and the fullness thereof, the world, and all who dwell in it. (Psalm 24:1).

If we refuse to steward what God has given us on His terms, God is free to take it from us. If it is taken away from individuals and families, it won’t disappear into the ether, it will be owned by Caesar and handed to his agents for redistribution.

Currently, the biggest single offender against God’s laws regarding the ownership of property is the civil government. Civil government, in direct violation of biblical law, owns all the land in the country and rents some of it out to its citizens1.

And, if you don’t pay the bribe (rates), you will likely be evicted. This is theft. The government has no right whatsoever to tax property.

We assume it has always been this way and so it may surprise many to know that the Government Acts that introduced things like rates, and even income tax were not introduced in Australia and a good part of the west until well into the 20th century2.

After all, what mother with sons was going to say no to the “war effort”?

As Christians, we understand the claims being made via the right to tax. The practice of eminent domain (ultimate ownership) is a claim to deity. 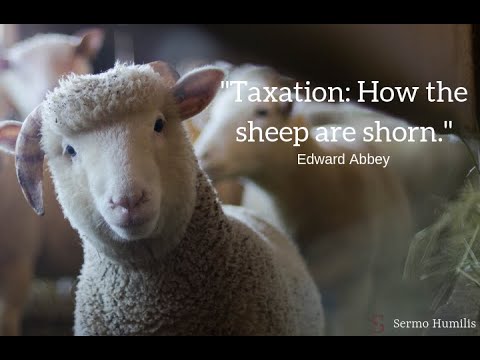 God’s total ownership is the grounds for our limited ownership as His stewards.

And so, half of the Ten Commandments are prohibitions against theft: I must not rob my neighbour of his life, his wife, his property, or his reputation; nor may I covet anything that belongs to him.

The kingdoms of this world belong to the Kingdom of our God and so they too are subject to these laws. Nowhere is anyone given permission to tax property or compulsorily acquire it from their own citizens.

How should a Christian respond when someone threatens to take what is his? Until Jesus finishes cleaning things up, we really only have one healthy option.

We can recognise it for the bribe that it is and pay it, trusting God to right the wrong in His own time.

We pay, not because we approve and have agreed to live on Caesar’s terms but because, as in all things, we are called to live life on God’s terms – and God’s law tells us to submit to these governing authorities whether they are corrupt or not.

The fact that those threatening to take away our homes claim to be fixing the town water pump does not justify the theft.

Likewise, the corruption of one group does not justify the revolt of another. God has not given permission for us to revolt. We currently have the government we deserve.

When God grants repentance we will see a change and to that end, we must confess and pray.

And while we pray and while we go about the quiet business of paying off bribes, we do it with glad hearts and with our eyes wide open. And that means calling things by their proper names.

In this case, the word you’re searching for is theft.

Blessed Assurance
The Servant of the Lord
Storms, Swine and Salvation
Resistance is Futile

The Bible teaches, and the ten commandments affirm, that since God is

On the third day, the friends of Jesus came at daybreak to the place