Hide Search
You are here: Home / Who we Are Instead / Where Justice and Mercy Meet
Reading Time: 3 minutes

We tend to view justice as the occasion where people get their “just desserts”, and, while this is true, there is another, inescapable aspect of justice that is evident everywhere, but often overlooked.

Behind the often comical “Pearly Gates” cartoon series by Ian Jones lies a deadly serious question: The question of God’s justice. The imagery of the Pearly Gates is found in the last book of the Bible, Revelation.

It’s at these gates that all things unclean are stopped. Like the elder tribesmen of Israel who sat at the city gates to hear and decide upon the judicial cases of the town folk, the Pearly Gates are a place where true justice is fully and finally executed.

But the Pearly Gates are not just a place where people “get what’s coming to them” but also where we are delivered from horrendous guilt. This was brought home dramatically in June 2014 in a news headline involving the suicide-murder of a couple in Sydney.

Their son had been born without eyes and with a severe mental disability, but he could hear.

His parents had raised him to adulthood through much hardship and were now faced with the prospect that necessary surgery would render him deaf.

They could not bear to see their son lose his only gift and live out his days as a vegetable, and so they ended his life for him.

Described as an act of compassion by the courts, the couple were not charged with murder and were given a good behaviour bond.

Some called the judge’s decision compassionate, but was it? The couple may have been freed from the charges, but this kind of justice was not able to deal with their guilt.

And so, in an effort to assuage the guilt, they executed justice for themselves and committed suicide shortly after the judge’s not guilty verdict. 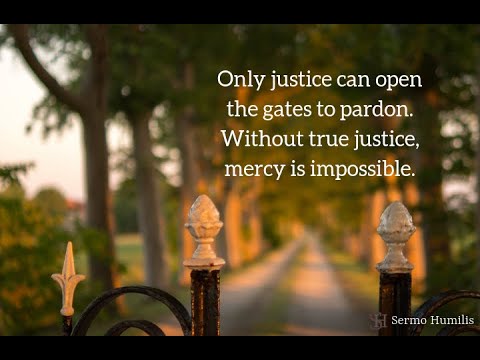 We hear from time to time of criminals who get caught and later admit that they were relieved when they were. This is not because such criminals wanted the condemnation they deserved but because only true justice can bring us deliverance from crippling guilt.

Mankind needs true justice, not just to make the world a safer place but because we have terrible guilt, and justice is the only way to be truly free of guilt.

The courts who dealt with the mercy killing of a disabled son thought they were acting with mercy – but they had forgotten what true justice is – and what it is able to do for the guilty.

True justice not only brings the full force of the law to bear on our sin or our crime, but true justice also makes mercy possible.

Where true justice is missing, self-justice is the only recourse, and this was the sad course taken by a couple weighed down by guilt.

It is sad because it was not necessary.

In the death of Jesus, mercy and justice meet in such a way that the crime is fully punished and we are fully pardoned.

The lifting up of Jesus on the cross was God giving Himself up to be punished for the sins of this world, not only to remove the sin, but also to remove the guilt of us who sin.

Having borne our sin on the tree, the justice of God was satisfied. This means that someone else has not only borne your sin but also your guilt.

The truth of this claim is obvious when we look at all the self-harming ways people try to free themselves from guilt. True justice sweeps nothing under a rug. True justice never minimises the crime.

In the death of Jesus, our sin has been fully paid for and we need not pay for it ourselves in order to be free from guilt and constant fear.

This is an incomprehensible gift that is available to all us who come out from under the cover of suffocating guilt, confess our sin and let God exalt in mercy over us.

Old and Grey
Substitutes
Jesus, Equal Measures
The Offence of the Righteous

Some things never change. Take the conscience. The problem of a dirty

In Judges, we have an account of how Samson loved a harlot, and