Contrary to popular myth, the Bible, above all ancient texts, extols the value of womanhood. The Bible honours women like no other book in the world. The Holy City is a glorious Mother; Jesus’ death was for His bride, and the first person to see Jesus after His resurrection was a woman.

Modern history also shows a correlation between the advent of the Gospel and the rising value of femininity and womanhood.

That being true, one of the signs that we have abandoned that gospel and removed the Bible from our culture is a return to the disdain of all things female and a despising of one of their chief honours—motherhood.

It’s May, and we are celebrating motherhood while simultaneously preventing it or despising it in a multitude of horrific ways. But where there is death, there is also mercy. Jesus died for His Bride, a Woman. He did this to cover the scandal of just this kind of sin and to restore the dignity and glory of motherhood.

A mother’s sacrifice is considered pretty mundane. It lacks the intrigue and allure of career, travel, mango espadrilles and the pumpkin-spice-latté crowd.

For those mums who feel that their efforts might be wasted on children and that they would rather be off doing something else, take a look at the faces around your table next time you are gathered all together.

Consider the fruit of your own mother’s hands. How many hands have her hands filled? And how many people will those little hands go on to serve?

How many grandchildren and great-grandchildren, friends, spouses and neighbours will those little hands go on to love and cherish because a mother once filled their little hands? 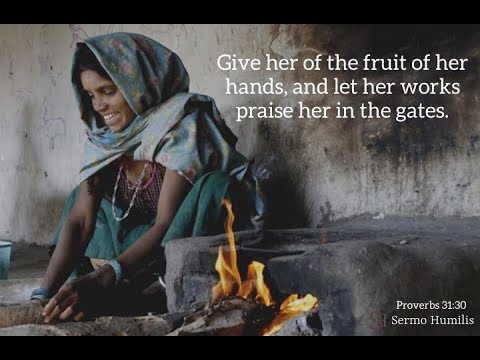 Given with love, those vegemite sandwiches that seem to only feed one will go on to feed a multitude as they are broken down and transformed into more serving hands.

In the hands of God, how many have been clothed by a mother’s laundry pile, selflessly tackled each day? As a beautiful reflection of the gospel, the work of a mother’s hands is multiplied, by God, through sacrifice so that a multitude may be fed, clothed and satisfied.

In fact, I would submit that there is more Christ-honouring wisdom reflected in mending a bruised knee, wiping a runny nose or straightening a fence post than much of what passes for church ministry and busy-work today.

And that wisdom is justified by her children.

The book of Proverbs draws to a close with these words,

Charm is deceitful, and beauty is vain, but a woman who fears the Lord is to be praised. Give her of the fruit of her hands, and let her works praise her in the gates. (Proverbs 31:30)

The goal of godly motherhood is godly children—the kind of children whose fruitful lives result in praise of motherhood.

That’s how Proverbs ends, but how did we get there? How did we wind up with such a mother? Proverbs gets underway by telling the next generation how you arrive at God-honouring motherhood,

Hear, my son, your father’s instruction, and forsake not your mother’s teaching… (Proverbs 1:8)

The word used for a mother’s teaching here is the Hebrew word, ‘Torah’, which in scripture implies the law and commandments of God.

A wise son listens to his father and marries the Proverbs 31 woman, and a wise daughter puts into practise the teaching of her mother so that she might one day become the Proverbs 31 mother.

And, as if all this was not reason enough to honour motherhood—either as a mother yourself or as a child—we read in scripture that the salvation of the world came through a man, borne of a woman.

God could have, I suppose, come into the world and taken on flesh any way He liked. But He chose to come into this world and save it through a woman. A mother.

And so, to honour motherhood, whether as one called to be a mother or as a son or daughter, is to honour Christ, by whom, through whom and for whom, all mothers were made.

In the last few chapters of John, the disciples have become

Life with God means leaving behind silly myths and old

As Jesus begins His mission to fulfil the “Year of the Lord's Favour”,