Hide Search
You are here: Home / Who we Are Instead / Lost and Found
Reading Time: 3 minutes

I read somewhere recently that, “If you love humanity then you don’t need a God telling you what to do.” Why is it then that those who so often chant the mantra, “Love is all you need”, never want to get on to a crowded bus?

Kids, they love humanity. They long to crash into one another. They will sardine themselves into a single carriage leaving the rest of the train empty just so they can be together.

They are by and large and at heart, free and as yet unshackled by the weight of sin that causes mankind to separate and isolate himself.

Location matters. Humanity cannot be truly loved from a distance. Yes, we ought to send our gifts to the needy and the poor. But how can it be said that we love humanity when we help the Syrian whom we have not seen, yet ignore the widow next door whom we have seen?

While Jesus was dining at Levi’s house, many tax collectors and sinners were reclining with Him and his disciples, for there were many who followed Him. (Mark 2:15)

People wanted to be around Jesus. They followed Him.

Well, some. Many of those who were actually entrusted with the message to, “Love your neighbour as yourself”, had trouble with Jesus’ love for humanity.

They felt that all this eating and drinking together with those on the fringe was going overboard. Like all reliable sinners terrified by God, they saw distance as a good thing. 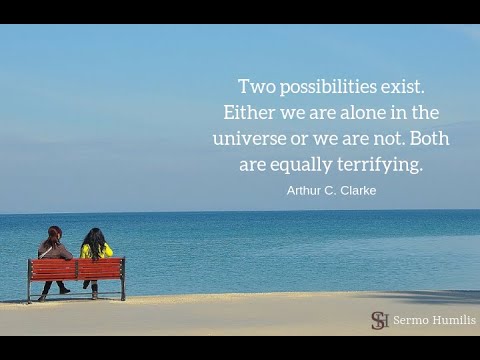 Jesus, however, thought that getting up close to those He loved was the most natural thing in the world.

All of which, on this fine resurrection Sunday, reminds me of Vincenzo Ricardo. Do you know him? No? Nor did anyone else.

His body was found slouched in his living room chair. He had been dead for 13 months.

As the forest tree falls, with no one to hear
So Vinnie sat, dead for a year.
TV and lights all remained on
Yet Vinnie Ricardo was long, long gone.

The television was his only companion. No doubt, that television had a lot to say to Vincenzo over the year, but it didn’t seem to care if he lived or died.

Two are better than one because they have a good return for their labour. For if one falls down, his companion can lift him up; but pity the one who falls without another to help him up. (Ecclesiastes 4:9-10)

How can a human being vanish for over a year and not be missed by anyone? The answer is loveless alienation, separation and distance.

We want our solitude, our space (Proverbs 18:1). But in the end we pay dearly for it.

And that’s the reason Jesus came into the world. And it’s why we celebrate the death and resurrection of Jesus as the Son of God. He loved this sardine tin of humanity.

Drawing near to us was, for Jesus, the most natural thing in the world. It’s also what has saved us from Vinnie’s fate.

Jesus became our neighbour and loved us like no other man. He sought us out, the lost and lonely Vincenzo Ricardo’s of this world, and He found us.

After Jesus heals the sick man by the pool in John 5, He disappears