Intrigue or value. A week in the Bahamas or a bin full of dirty nappies. A company car and cocktails in Double Bay or split ends, a runny nose and four hours in a hospital waiting room.

A mother’s sacrifice is considered pretty mundane. It lacks the intrigue and allure of career, travel, mango espadrilles and the latté crowd.

I am one of five children and I cannot recall a day growing up when the table was not laid with food, however simple. When my school clothes were not ironed by seven in the morning, when my hair was not brushed, or my splinters not removed, or my mother not attending the dozen or more weekly events for her kids.

What was she doing? Why bother?

She was multiplying loaves and fishes. She was feeding her children bread, and through that simple offering, she was setting the stage for the feeding of thousands.

For those mums who feel that their efforts might be wasted on children and that they would rather be off doing something else, take a look at the faces around your table for a moment.

How many people will they go on to serve?

How many grandchildren and great-grandchildren, friends, spouses and neighbours will those little hands go on to love and cherish because you once filled their little hands?

Charm is deceitful, and beauty is vain, but a woman who fears the Lord is to be praised. Give her of the fruit of her hands, and let her works praise her in the gates. (Proverbs 31:30)

Given with love, those Vegemite sandwiches that seem only to feed one will go on to feed a multitude as they are broken down and transformed into more serving hands.

Your laundry pile, selflessly tackled daily, will be used in the hands of God to clothe many.

The work of your hands is being multiplied through sacrifice so that a multitude may eat and be satisfied. 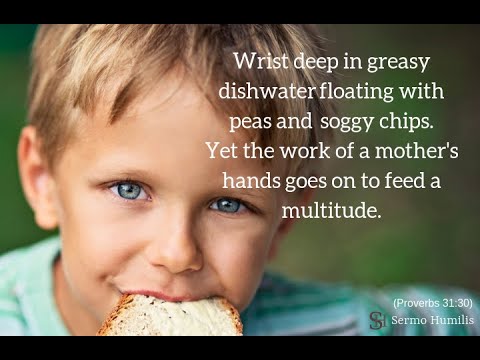 Contrary to popular myth, the Bible, above all ancient texts, extols the value of womanhood. The Bible honours women like no other book in the world. It’s a woman who is chosen to bring forth the Saviour of the world.

The Holy City is a glorious Mother; Jesus’ death was for His Bride, and the first person to see Jesus after His resurrection was a woman.

Modern history also shows an indisputable correlation between the advent of the Gospel and the rising value of femininity and womanhood.

That being true, one of the signs that we have abandoned that Gospel and removed the Bible from our culture is a return to the disdain of all things female and a despising of one of their chief honours – motherhood.

It’s May, and we are celebrating motherhood while simultaneously preventing it in a myriad of horrific ways. This is not honouring motherhood.

But where there is death, there is also mercy. Jesus died for His Bride, a Woman. He did this to cover the scandal of our sin and to restore the dignity of all women.

Every female is precious in His sight, and in coming to Him we all find full and complete forgiveness. We find a mercy that covers our shame and a dignity that restores the true honour belonging to motherhood.

Gratitude, The Non-Crappy Version
Blessed are all who take Refuge in Him
The Sabbath Under Our Feet
Dinner with a Sinner

According to atheism, we're small because the cosmos is so big.

Jesus' Sabbath healings in John 5 result in persecution. But this does