Hide Search
You are here: Home / Jesus Through all of Life / #3 Jesus and Betrothal
Reading Time: 4 minutes

In the gospel, by an act of betrothal, God the Father sets apart a bride for His Son who is willing to pay the bride price with His own life. As pictured in Hosea, this is the hope of the gospel: That God would take an unworthy people, and purify them so that they might belong to Him and be united to Him in faithfulness.

Through the Bible’s teaching on betrothal, we learn that men and women are not free agents. We learn that the purity and happiness of both are precious in God’s eyes and therefore something to be guarded.

Modern dating, on the other hand, is a 20th-century invention that disregards purity, family, and the stability of a godly society in its pursuit of individual passion.

It does not prepare them for marriage but for a series of vulnerable encounters and lifelong hurt. It teaches, falsely, that we can enjoy all the trappings of marriage without public accountability or responsibility.

A young girl is not a free agent. She belongs to a man already—her father (cf. Deuteronomy 22:13-22)—and until he gives her hand in marriage, a young man has no right to come along and take it.

When such realities are ignored, society is left with a host of emotional, psychological and physical pain.

Borrowed from the world, what has come to be known as Christian dating differs only slightly. Christian dating can be defined as pre-heating the oven through a string of failed relationships without actually cooking the roast. At least, that’s the plan.

But the only real difference between the church’s current attitude to dating and the world’s attitude is guilt.

We have given our young people enough of the gospel to feel guilty, but not enough to strengthen their commitment to purity. And so, getting burnt is considered inevitable and we comfort ourselves in saying, “It’s all part of the learning process.”

But this is not true. It would be more honest to say, like all things that are overcooked, that it is all part of the hardening process because that is typically what dating does to the heart over time.

Betrothal recognises the vulnerability of such relationships and provides a fence. This fence is provided through God’s basic institution for mankind—the family.

As such, the family has the major responsibility for the formation of new families.

That fence for a daughter is her father and later her husband in covenant marriage. And until that guard rail has been built, neither daughter nor son is invited to make out on the balcony. 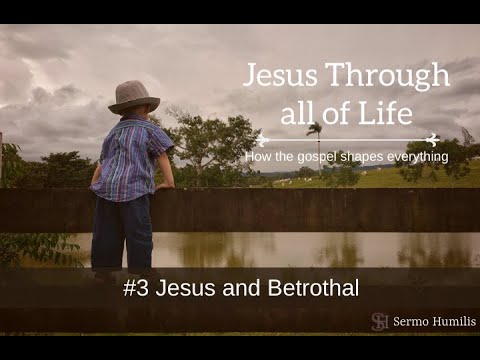 Dating seeks to make our relationships a private affair. Betrothal seeks to protect, cherish and nurture those relationships through the accountability in marriage which takes place publicly.

With authority comes responsibility. Fathers are responsible for their daughters’ purity until they marry. This is made explicit in Deuteronomy 22:13-15, 20-21.

In this passage, we see the shocking consequence a daughter of Israel who is found to be impure. She is to be stoned outside her father’s house. We understand the punishment, but why the location?

In Numbers 30:3-16 we see that these responsibilities go beyond the issue of purity.

A Father may not, when his daughter makes a decision, any decision, run to the shed and hide behind the lathe. A father’s God-given authority and responsibility is to instruct and guide her.

When she comes home from the pub, announces that she and her new man have decided to shack up, he cannot be silent (1 Kings 1:6). A father who abdicates here is not a good father. He is a father who is about to cover himself in shame.

A typical example of godly betrothal is found in Genesis 24.

Abraham sends his servant off with guidelines for choosing a wife for Isaac (Genesis 24:5-10). The marriage proposal is made to Rebekah’s household and only pursued if Rebekah gave her full consent (Genesis 24:57-58).

For Rebekah, it would mean being united to Isaac’s inheritance. Note Laban’s acceptance of this reality and his enthusiasm for his sister’s prosperity,

And they blessed Rebekah and said to her, “Our sister, may you become thousands of ten thousands, and may your offspring possess the gate of those who hate him!” (Genesis 24:60)

It is also interesting to note that in the case of a mostly absent father (for whatever reason), Laban, as the eldest son, has a responsibility to guard the purity of his sister.

These laws and customs of betrothal are there for the protection of our children, the family, and the wider society. But more than this, the principles of betrothal, like the life of Isaac, anticipate the gospel.

In the gospel, the father sends the friend of the bridegroom to find and prepare a bride. John the Baptist does find her, but she is in pretty poor condition and so, the bride price will be costly. Jesus will have to surrender His own life at the cross.

In accepting the proposal the bride stands to share in the inheritance that is His. She (the church) also becomes a partaker in His holiness and is therefore made holy herself.

There is a great deal of grace poured out by Jesus in all of this. For fathers who falter and for those who let their purity and responsibilities slip. But the solution is not diving in for more of the same bad dating game.

The solution is the imitation of Christ and in living life on His terms.

Perhaps, when the world sees us take these relationships seriously, they may become more interested in what we believe.

When they see echoes of Christ’s sacrificial love in young Christian men, shadows of God’s fatherly protection in fathers, and a desire for purity in our daughters, then perhaps they will give up an already bankrupt culture in favour of the wholeness we have in Jesus.

Our betrothals are among the most powerful expressions of the gospel we have, not only in delighting in purity but in showing the inestimable value of the cross.

Death is a miserable business. It takes us away from all that we

There is no getting around the fact. Rahab, a prostitute, had a choice

The things that happen to Hannah could happen and do happen, to

In the gospel, by an act of betrothal, God the Father sets apart a

In John 5:1-14, Jesus, having completed a tour of Galilee, returns to