Hide Search
You are here: Home / Jesus Through all of Life / #12 Jesus and the Environment
Reading Time: 5 minutes

God’s law provides very simple instructions on how man is to interact with the environment. We are told throughout scripture that man is a steward who is to work and enjoy the earth through productive labour.

In Deuteronomy 11:10-17, the people of God were to enter the land that God had given them for the purpose of increase and blessing. Taking the garden of the Lord as their vision, they were to cultivate the land and make it fruitful.

They were commanded to care for fruit-bearing trees and pastures, domestic animals, and, during Sabbath years, allow their fields to be gleaned by wild animals (Exodus 23:10-11). And, through careful obedience, God promises not only to bless the work of their hands, but also the environment in which that work takes place.

The same passage also came with a warning.

Take care lest your heart be deceived, and you turn aside and serve other gods and worship them; then the anger of the Lord will be kindled against you, and he will shut up the heavens, so that there will be no rain, and the land will yield no fruit, and you will perish quickly off the good land that the Lord is giving you. (Deuteronomy 11:16-17)

The fruitfulness of the land here is tied to obedience to God’s law and faithful worship.

What kind of temptation would cause Israel to serve other gods? We get a clue back in Deuteronomy 11:10-12.

For the land that you are entering to take possession of it is not like the land of Egypt… where you sowed your seed and irrigated it… But is a land of hills and valleys, which drinks water by the rain from heaven; a land that the Lord your God cares for. The eyes of the Lord your God are always upon it, from the beginning of the year to the end of the year.

And so, the temptation to listen to other gods was real. Especially the fertility gods.

These other gods, though under other names, are still very much with us today and so, we need to ask, “Who are these gods and what are their names?”

In 1992, Maurice Strong, a member of Club of Rome1 and a devout Bahai, chaired the Rio Earth Summit. In his opening speech he declared,

It is the responsibility… of each human being to choose between the force of darkness and the force of light. We must transform attitudes and adopt a renewed respect for the superior laws of divine nature.

The goal of the agenda was to call the leaders of the world to submit to ecocentric (earth-centred), law. Otherwise known as Jainism.

What was involved in this transition? From the United Nations down to local councils it included a global program to restructure the traditional family. Depopulate. Abolish private property and farmland, and develop human resettlement zones.

Why? Because, according to the Biodiversity Assessment Report which came out of the summit, population, private property, farming, and families, were the cause of an environmental catastrophe.

Under this agenda, the value and existence of Man and his work in the world were to be governed by laws of sacred nature. Here, man is not subject to God but to mother earth. The report concludes on page 863,

The root causes of the loss of biodiversity are embedded in a world view characterised by the denial of the sacred attributes in nature, a characteristic that became firmly established about 2000 years ago with the Judeo-Christian-Islamic religious traditions.

In other words, Christianity is to blame for the sorry state of the world because it does not involve worshipping “sacred nature.”

The solution? Re-education2. We needed a lesson from the experts in paying homage to natures divinity. And so, each March we are told to turn off our lights and sit in the dark – a fitting symbol for their religion.

Like all idolatry, environmentalism is a religion of slavery, poverty and fear. Like the paganism of old, the gods are angry and the sky is falling.

Environmentalism is the worship of nature in disguise3 and demands our participation. If we join the idolatry, we are told, we just might pacify the wrath of our angry overlord, mother nature. 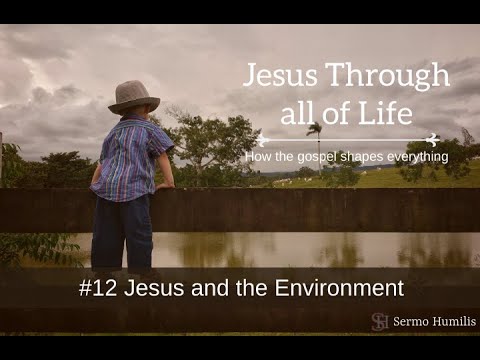 Turning from this idolatry to the scriptures, we learn that the use and care of creation and the resulting blessing come to us in quite a different way.

Put simply, an obedient and godly community leads to a fruitful, prosperous and intelligent neighbourhood, plus a healthy and bountiful environment.

This is not incidental. The restoration of creation and the redemption of all things is grounded in obedience. In particular, the obedience of one Man, Jesus Christ.

The gods of this world, in tapping into the threat of environmental disaster, have tapped into something that we, made in God’s image, all long for – the renewal and restoration of the earth. But in the gospel, that renewal comes by promises guaranteed in Christ, not man’s ingenuity or the worship of nature.

So, what are those promises?

They are the promise like, “While the earth remains, seedtime and harvest, cold and heat, summer and winter, day and night, shall not cease.” (Genesis 8:22). And, “He upholds the universe by the word of his power.” (Hebrews 1:3).

In Deuteronomy, we learn that it’s disobedience that pollutes. It’s sin that defiles the land. In Christ, we learn that it is only through redemption that the earth is transformed. And we are called to participate in that transformation by adorning our lives with the gospel.

We believe that God loves this broken world and is renewing it as our inheritance. Faith says, ‘Amen’, and looks after the inheritance (instead of hugging it).

It’s only when we come to repentance in Christ and begin to walk in fear, reverence and obedience to Him, and not to the greenweeds and weird-beard priests of nature, that we are able to interact with our environment in wisdom.

And so, as believers, we not only keep our streets clean, we seek to adorn the gospel by making the world more lovely than it was before we arrived. We cut down a tree to make a beautiful chair for grandma to rock in. We swim with dolphins and build dams to nourish the dry ground.

And we look to the Creator of Heaven and Earth for the redemption of creation in Christ as we live out the obedience of faith that flows from that redemption.

1To appreciate the Club of Rome, here is a snippet from their own publication,

“In searching for a common enemy against whom we can unite, we came up with the idea that pollution, the threat of global warming, water shortages, famine and the like, would fit the bill. In their totality and their interactions, these phenomena do constitute a common threat that must be confronted by everyone together. All these dangers are caused by human intervention in natural processes, and it is only through changed attitudes and behaviour that they can be overcome. The real enemy then is humanity itself.” The First Global Revolution (p75, 1991) Follow up publication of their report, “Limits to Growth”. Club of Rome, 1972)

3 By their own admission, the environmental agenda must be disguised or else it would be flat out rejected. And so, J. Gary Lawrence, Council on Sustainable Development recognising this problem said that, “…[if people understood the Agenda they would,] …actively work to defeat any elected official who [wanted to implement] it. So we call our process something else, such as comprehensive planning, growth management or smart growth.”

God has entrusted us with various things: Sheep, sons, and coins,