We do not serve an absent God. We serve a God who is near. Near to the brokenhearted, near to the weak, the frail, the fruitless and the frightened. We are children of the living God who knows His way to Shiloh.

Shiloh was the home of the Ark and the Tabernacle during the time of the Judges. It was the religious centre of Israel during the roughly 400 years that Israel had resisted appointing a king.

It was at the tail end of this period that we meet Hannah, a barren woman who was about to enjoy God’s favour.

And, though it would be no comfort to Hannah, it helps us to remember that she was not the first or the last barren woman to enjoy God’s favour.

Sarah, Rebekah, the soap opera that was Rachael, Samson’s mum and Elizabeth were all women who could appreciate Hannah’s grief.

Barren women play a key role in history. These women represented the absence of life, a fruitless branch. And yet, from such brides, God brought forth life where there was none.

And so, when we look at Hannah, we see shadows of this group of otherwise unremarkable women. God is about to bring life out of stoney ground but it would not come without aggravation and pain.

Hannah was one of two wives to Elkanah. Peninnah was the other. What Peninnah used to do to Hannah wasn’t a little jibe. This was torture.

Her rival used to provoke her grievously to irritate her because the Lord had closed her womb. So it went on year by year. As often as she went up to the house of the Lord, she used to provoke her. Therefore Hannah wept and would not eat. (1 Samuel 1:6-7)

You can just picture the scene with Peninnah. Whispered taunts in the kitchen, mocking looks when Elkanah wasn’t looking, public ridicule about this ‘fruitless branch’ when out in the company of others. 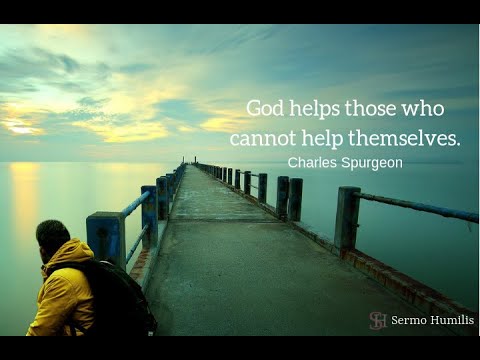 The location for the drama that unfolds is the Tabernacle.

Under God’s instruction, the Tabernacle and later the Temple were consciously decorated to bring Eden to mind. What we have here is enmity in the midst of a garden sanctuary (Genesis 3:15).

It’s here that Hannah breaks down and cries under the weight of shame thrown upon her by her tormentor.

Until now, Hannah hasn’t eaten any of the festive Tabernacle food or drink. Never-the-less, such is Hannah’s wailing that Eli the Priest wonders whether she is drunk. She isn’t. She is calling upon her God.

Hannah’s God was not some lounge room deity. He is the “Lord of Hosts” – the God of an army. Hannah weeps, and God hears (Psalm 6:8).

It’s this kind of hope, mingled with pain, that has caused the church through the ages to sing.

Eli blesses Hannah and Hannah believes that God has heard and will answer her prayers. How do we know she believes? Because now she eats.

That’s what faith looks like. Faith moves us from grief to gratitude and gratitude gives thanks for the food on the table.

And so, God remembers Hannah and in time she receives a son. A firstborn from the Lord.

Samuel is a Gift from God for the people of God.

What Hannah had asked for was a son to cover her shame. God had heard her cry and come to Hannah. And so after Samuel is weaned Hannah goes back to Shiloh to give back to the Lord what He had given to her.

Some people see the Old Testament as all ritual, no nearness, no relationship with God. Hannah’s encounter with God is an antidote to this myth.

What we are seeing here is God’s Modus Operandi.

When His people are without strength, without resources, or hope or life; when all human gimmicks have failed, then, God loves to draw near, stretch out His hand and bring forth something beautiful.

It’s in our weakness and in our distress that God loves to roll away the stone.

Perhaps you have had moments like this. Times in life when you had to live with Peninnah. Times of being broken and emptied.

Remember Hannah. It’s at these times that God draws near and gives you His Son.

The joy of the Lord is our strength; and laughter, as the wise man

As I contemplate the unremarkable fact that the climate changes, or