Hide Search
You are here: Home / The Life and Times of Jesus / Jesus, Thy Rod and Thy Staff
Reading Time: 3 minutes

A bruised reed and a smouldering wick. These words, taken from Isaiah are often quoted in connection with Jesus’ tenderness. And, though the Lord’s tenderness is present to heal the multitudes in Matthew 12, the surrounding events and original prophecy seem to suggest Matthew has something else in mind.

The Pharisees are plotting to destroy Jesus (Matthew 12:14), but Jesus’ response is not to destroy them in return. At least not yet.

Instead, He withdraws. The crowds follow him, He heals them—but He also hushes them (Matthew 12:16). Matthew says He hushed them so that “it might be fulfilled which was spoken by Isaiah…”

Behold My Servant… He will not quarrel or cry aloud… a bruised reed He will not break, and a smouldering wick He will not quench, until He brings justice to victory and in His Name, the Gentiles will trust. (Matthew 12:18-21)

But who or what are the bruised reed and the smoking flax that Jesus promises not to crush or extinguish, “until…..”?

One of the great things about Isaiah is that he gives you a dictionary definition of words so you can understand them when you see them  appear later.

A bruised reed is first mentioned by in Isaiah 36:6 which reads,

Behold, you are trusting in Egypt, that broken reed of a staff, which will pierce the hand of any man who leans on it. Such is Pharaoh king of Egypt to all who trust in him (cf. Ezekiel. 29:6)

A bruised reed (think of a Shepherd’s staff) cannot be trusted because it snaps and pierces your hand. You can’t lean on it and you can’t depend on it. That was Israel’s problem. Leaning on the wrong things. Worthless things and worthless teachers.

The first time we come across a smouldering wick is in 1 Samuel 3:1-3. Here, in one breath, we are told that the word of the Lord is rare, Eli (who has become a worthless teacher) is practically blind and the lamp of the Lord is fading (same word used in Isaiah 42).

There is no indication in Matthew 12 that these are images of struggling faith or fragile believers. 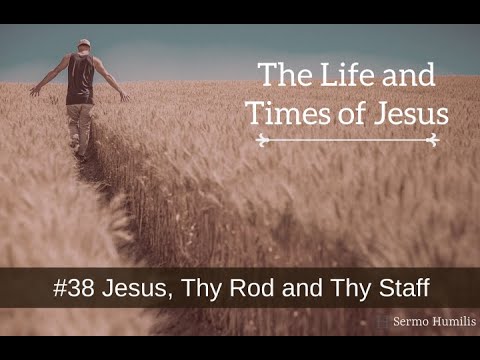 Being a bruised reed or a smouldering wick is never a good thing.

They are things that people put their hope in but which let them down. Things you counted on but which failed you. They are the little gods that leave you in the lurch, which cause you pain and put you in the dark.

The bruised reed and the smouldering flax in the context of Matthew 12 are like blind Eli, they are the faithless teachers of Israel.

They are the bruised reeds that will pierce the Lord’s hand. And Jesus will let them.

He doesn’t quarrel or shout down His enemies, nor does He allow the crowds to do it.

He won’t crush the bruised reed. He won’t snuff out the candle. He doesn’t destroy them. Yet.

Instead, He allows himself to be let down. He will allow Himself to be crucified so that the Gentiles might come into the kingdom. Then what? Then, Isaiah 42:13-20 tells us, He will make one almighty racket and lay waste those faithless teachers who have been blinded by unbelief and deaf to the Lord’s salvation.

Jesus’ refusal to break bruised reeds and snuff out smouldering wicks is tied to His mission of compassion. He will not crush them or extinguish them until He has shown mercy to the Gentiles and they come marching into Zion with singing, which, in the Book of Acts, they do.

This refusal to prematurely bring judgement on the Pharisees and faithless teachers would lead to Jesus’ death but not to His defeat.

It’s precisely by suffering this injustice and being pierced by these broken reeds that He saves the Nations.

In Isaiah 42:4, which Matthew doesn’t quote here, God promises that Jesus will not be “bruised” and His light will not be “quenched”: The very same words used for the state of the reed and the candle.

Unlike the bruised reeds and smouldering wicks of Israel’s teachers, and unlike the little gods and Pharaoh’s of Egypt, you can lean on Him and He won’t splinter and pierce your hand. He is a rod and a staff that will comfort you and give you light.

Here, Jesus allows Himself to be let down so that He won’t ever let you down.

Jesus, The Harvest
Jesus, Hunger and Thirst
Jesus, A Ransom for Many
Jesus, Meek but not Weak

The Gospel, as the saying goes, is more than a steak on your plate

Looking at artist's impressions of the bear attack in 2 Kings 2,

Fear has often been used to control a population and any fear will do.