Hide Search
You are here: Home / Who we Are Instead / Meet the Fool
Reading Time: 3 minutes

The fool despises wisdom and discipline. But this not what made him a fool. This is just the evidence. What made him a fool happened way back when he decided God would not be his starting point. The fool is a fool because God is not axiomatic.

The fear of the Lord is the beginning of understanding; fools despise wisdom and discipline. (Proverbs 1:7)

The contrast here is between those who fear and those who do not. The fool is a fool, not because he despises wisdom and instruction but because he does not begin His thinking with reference to God.

And the reason he does not begin his thinking with reference to God is that he does not fear God.

Likewise, the wise are not wise because they love wisdom, instruction and knowledge but because they fear God. Their thinking begins with God.

Wisdom starts with God and proceeds from there.

Whether we are talking about who to marry (which is very much the subject of Proverbs) or what to do on Tuesdays or how to make a buck or how to plough a field, the wise man is wise because reverence for God moves him to start with God.

By contrast, the fool starts his thinking by placing himself at the centre. And, because the fool is opposed to beginning his journey with reverence for God, it follows that he doesn’t like being corrected or re-directed by the wisdom of God as he travels along the road.

Many of us do this unknowingly. We profess to love God, and we include God in our thoughts. We include Him in the process – at some point.

A man falls in love with a girl, for example, and he prays that God would bless the marriage. 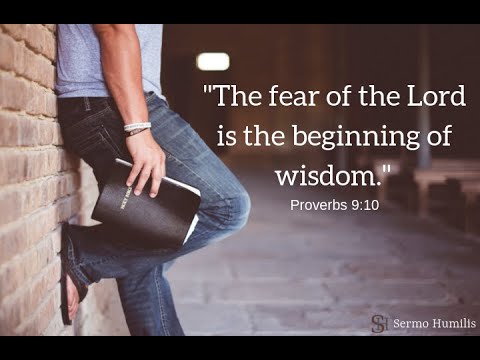 The choice may not have been based on anything God might have said regarding a suitable mate – that part was decided via our own subjective standards and feelings.

But, having factored God into the equation with a prayer or some Christian counselling at some point along the way, we imagine that we have covered our Christian bases.

A young married girl decides that, because she is the better wage earner, her husband should stay home and raise the kids. Reverence for God might have led her to go ask her grandmother about that (Titus 2:3-6), but she felt she was acting wisely by her own standards.

Now, I am not saying that all such decisions are the mark of the fool. What I am saying is that these are the starting points that, if unchecked, can wind up making a fool.

What I am saying is that, according to Solomon, a fool is a fool because his lack of reverence for God causes him to start somewhere other than with God.

But God is not just part of the process. He is not an element in the equation of human existence. He is the Alpha and the Omega. The beginning and the end of all wisdom, all knowledge and all understanding.

In the end, the fool winds up with what the Bible calls a reprobate mind.

Professing themselves to be wise, they became fools and,  …since they did not like to retain God in their knowledge, God gave them over to a reprobate mind… (Romans 1:22, 28)

The word reprobate is not a word you hear much these days. What does it mean?

A man I once read about had this to say,

“I remember growing up in Big City, USA, and passing by skid row. I asked my dad why all those men were just sitting around. He said that they were reprobates. I asked what he meant. He said: they do not work.”

Interestingly, scholar Matthew Henry had this to say about a reprobate mind,

“…reprobate mind – eis adokimon, a mind void of all sense and judgment to discern things that differ, so that they could not distinguish their right hand from their left…”

In other words, a mind that does not work.

After Jesus heals the sick man by the pool in John 5, He disappears

In scripture, the reality always exceeds the metaphor. Satan is

The tower of Siloam had fallen and killed many. Pilate had slaughtered