The Rabbi’s had a saying, “Not he who begets, but he who brings up is the Father.” This is not a quirk of modern psychology. This is the way the world works and something that Jesus taught us very plainly in John 8:39-44.

By nature, we do the will of the one who raises us. We follow, often unconsciously, the ones that educate us day in and day out; the ones that teach us what to think and how to think. This is true of us because it was true of Jesus.

At His baptism (Luke 3:21-22), God declares that Jesus is His Son and Jesus is promptly filled with the Spirit. As any Jew would know, the next thing that is likely to happen is war. Depend on it. Just as it was true of Othniel, Gideon, Jephthah, Samuel and Saul, when the Spirit comes, somebody is going to be doing battle.

Empowered by the Spirit of His Father, Luke 4:1-2 records that Jesus was led into the wilderness where He would do battle with Satan. The wilderness brings to mind the people of Israel, who were also described as God’s son (Hosea 11:1).

Luke also names Adam as the son of God in the genealogy of Jesus in Luke 3,

Adam was formed from the dust of the land and placed in Eden (a mountain, Ezekiel 28:13-14) where he took up residence in a garden sanctuary in order to commune with God.

Later, Israel was led through the wilderness to a mountain and the establishment of the Tabernacle (decorated as a garden sanctuary) where they too were invited to commune with God.

Following this same pattern, Jesus’ temptation will move from the wilderness to a mountain and, like all things in Luke, end at the temple (Luke 4:3-9).

And, like Adam and Israel, the question is the same; “Who will prove Himself a faithful Son?”

The Test of Sonship

The devil first invites Jesus to prove His Sonship through self-sufficiency. The point of testing, like Adam and Israel, is food.

The temptation for Adam, Israel and now Jesus is to pursue a life apart from God as seen by the things we depend upon to sustain us. But, being a Son means living by the Word of God. Not just in some abstract, mystical sense, but in concrete terms.

A true son obeys God’s word as it stands.

The power of ordinary things to quietly draw our dependence away from God is often overlooked. It matters which table you sit at (1 Corinthians 10:21). It matters who you look to for your provision. 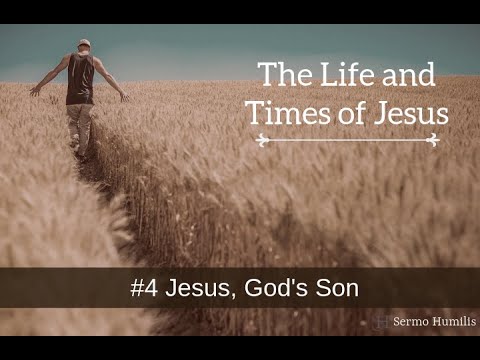 The second temptation is a temptation to flat-out idolatry. Just as the tribes of Israel bowed down to Joseph for grain in Egypt, so we will ultimately bow down to the one we believe is feeding us: Whether it be the state, our parents, God or lunch-lady Doris.

Adam was tempted on the mountain of God with idolatry, “You shall be as gods…”. Israel, God’s chosen son, was tempted with idolatry on the Mountain at Sinai with the golden calf, “Here are your gods, O Israel, who brought you out of the land of Egypt.”

And now, Satan invites Jesus up to the mountain and offers Him an empire. The temptation here is to gain His inheritance by worshipping another god.

How you amass your inheritance is an indicator of who your father is. Being a true Son means receiving a Kingdom from your Father in Heaven, not from the overlords of this earth.

The third temptation has to do with presumption. The doubt which leads to a demand for proof. Adam was tempted with the words, “Did God really say…”. Israel fell when she began to ask, “Is God really among us?”

By the time of Jeremiah, the temple had become a place of superstition (Jeremiah 7:4). According to one popular myth, the Messiah was expected to leap from the temple and sail safely down to earth, delivering His people.

God does promise protection, but only in the line of duty (Ps 91:9). Jesus is now tempted to behave like the rest of the Jews in His day. But, being a true Son will mean obedience to the cross. It means deliverance through suffering, not abseiling down temple walls.

Through all this, Jesus shows He is the faithful Son who, having been tempted as we are, is able to sympathise in our weakness. Equally important, the faithfulness of Jesus to God tells us who His Father is.

And He said unto them, How is it that you sought me? Knew you not that I must be about my Father’s business? (Luke 2:49)

And so, while we gather our skirts and run about in circles in vain trying to discover who we are, we are invited to stop a moment and consider Jesus. His life was not orientated by the question, “Who am I?”, but rather, “Who is My Father?”.

It’s a simple question and the vital test of sonship. One that can be easily answered by simply looking at what you are currently doing.

John's Gospel was written during a time of great persecution.  It was

"How long will you keep us in suspense? If you are the Christ, tell us

What should the world see when it looks at us? It should see Jesus