Hide Search
You are here: Home / Jesus Through all of Life / #1 Jesus and Inheritance
Reading Time: 3 minutes

Something must be done with our things when we are done with them ourselves. We can bequeath our wealth, large or small, according to our own subjective standards of justice and equity or, we can adorn our lives with the gospel (Titus 2:10) by using our wealth the way God uses His wealth:  By sponsoring the increase of holiness.

In thinking through the ways that the Gospel might shape and adorn every area of life we start with inheritance because inheritance was the first thing given to Adam at his creation.

Adam must take this capital and build upon his inheritance. He is to fill the earth, increase and multiply. But Adam lost his inheritance through his sin.

Over time, men like Abraham are promised an inheritance while others, like Cain and Esau, are disinherited (Genesis 25:19-34). The reason is simple. God finances holiness and faithfulness over blood ties, equity or personal preferences.

Through Jesus, God fulfils the law of inheritance by making His firstborn Son the heir of all things and then invites us to share in His inheritance forever (Matthew 5:5, Luke 18:18).

One of the places we read about the laws of inheritance is in Deuteronomy 21.

…he shall acknowledge the firstborn, the son of the unloved, by giving him a double portion of all that he has, for he is the firstfruits of his strength. The right of the firstborn is his. (Deuteronomy 21:17)

Under the law, the firstborn son got a two-thirds (double) portion of his parent’s wealth.

Its purpose was to capitalise the future of the family estate and also assume the responsibility and care for ageing parents (Mark 7:11ff)

All other sons received an equal share of the rest which could include land and gifts.

Daughters were capitalised through marriage to a godly man. Slaves could also inherit as they became virtual family members. 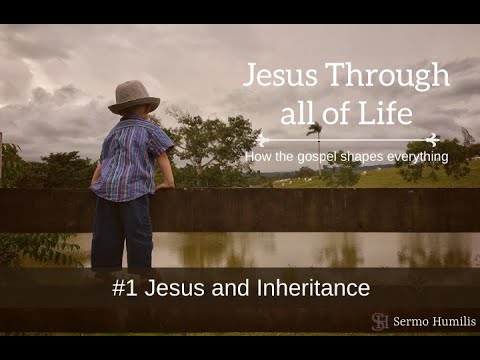 Throughout scripture, God puts wealth into the hands of the righteous as an inheritance because God’s purpose is the continuation of a faithful and obedient people.

This fact raises a number of objections. Here are three of those objections.

These are Old Testament laws

This fact does not change the authority of the law as the rule and guide for life. For example, we would not say that since Deuteronomy 21:15-21 is Old Testament, that we can now neglect the children from a first marriage.

Our freedom is never from the law. Law is inescapable in every sphere of life. The question is not whether we will have a standard, but always, which standard will we have.

We ought not to judge a precept by its abuses. The problem is located in the human heart, not the law of God.

The possibility of abuse is not grounds for withholding an inheritance.

Like the father of the prodigal son, we would not withhold an inheritance just because they might abuse the gift in the future.

These Laws are Inequitable

The idea that some inherit less than others may appear unfair to us. But a firstborn son was not given more because he was special and neither were daughters given less because they were unloved.

Eldest sons were given capital to continue the family’s wealth and provide care for ageing parents and unwed sisters. He was not given an easier ride, he was given greater responsibility.

Daughters were incentivised to find godly and reliable men, and thus enjoy their wealth as a new household. A good reason for not marrying a lazy man.

Inheritance is designed to achieve something. Namely the building and multiplying of a holy people (Malachi 2:15).

And so, an ungodly older son could be set aside for a godly younger son as was the case with Reuben (1 Chronicles 5:1) and Adonijah (1 Kings 1:5-9).

God does not sponsor rebellious sons and thereby finance the increase of wickedness. Neither should we.

A good man leaves an inheritance to his children’s children, but the sinner’s wealth is laid up for the righteous. (Proverbs 13:22)

This principle sits above our modern view of equity and is patterned after the Gospel of Grace.

In the gospel, Jesus is the firstborn Son who assumes responsibility for the entire estate. His penniless bride is united to Him in mercy and stands to enjoy all of the blessings that He has inherited as a result (Galatians 3:29).

Working through the issues surrounding inheritance can be painful and complicated for many families and we cannot apply things in a wooden manner.