Hide Search
You are here: Home / The Life and Times of Jesus / Jesus, Look and Live
Reading Time: 3 minutes

Matthew 27:45-61 gives us the account of Jesus’ death on the cross, the cataclysmic events that occurred while he was dying and His burial. At the centre of these events is the declaration of the Centurion in verse 54 who looked up to Jesus and said,

Surrounding this confession we read that the earth rumbled, rocks were split, the curtain of the temple was torn in two and old saints long gone were resurrected and spotted doing a few home visits around Jerusalem (Matthew 27:51-53).

These divine signs not only vindicate who Jesus is but also explain His death.

Earthquakes in scripture often accompanied the Lord’s approach as a warrior (Isaiah 29:6) and the opening of the graves declared Jesus’ death as a triumph over death.

And so, Matthew joins the tragedy of death with the victory of resurrection. 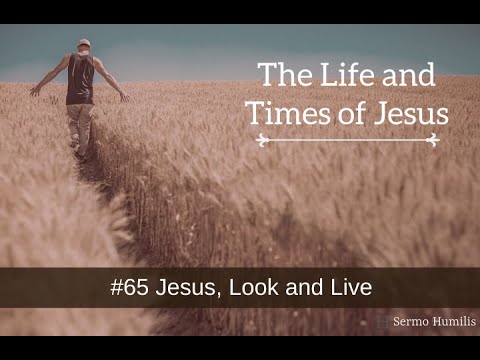 The tearing of the veil which separated man from God’s presence signifies that a way has been made for man to return to life and relationship with God.

1 Chronicles 3:14 tells us that the veil in Solomon’s Temple was made of fine linen. After His death, Jesus, signifying a new and better temple, is wrapped in a fine linen shroud by a rich man named Joseph (Matthew 27:59).

Joseph puts Jesus in his own tomb; a tomb prepared for Joseph.

This was to fulfil what was spoken of by the prophet Isaiah,

And they made his grave with the wicked and with a rich man in his death, although he had done no violence, and there was no deceit in his mouth (Isaiah 53:9).

Scripture often refers to the grave as both a pit and a prison (Psalm 35:7, 1 Peter 3:19,). These metaphors bring to mind the life of an earlier Joseph, the Joseph of Genesis.

Joseph is given a royal robe by his father, is despised by his brothers and thrown into a pit. After arriving in Egypt, he is soon despised by Potiphar’s wife, stripped of his robes and again, thrown into prison along with two others holding bread and wine (Genesis 40:5).

While in prison, Joseph brings God’s testimony to bear in the interpretation of dreams. One will be restored in three days, the other will hang from a tree.

After a period of time, Joseph is released from prison and exalted to power where he goes on to feed the world, save his brothers and show mercy to those who had previously despised him.

Here in Matthew, having been crucified between to other men, one looking to him in faith, the other despising Him, Jesus goes into the tomb; a tomb reserved for a man named Joseph.

And, given the parallels, we know what is likely to happen next. Jesus will come out of this tomb and He will go on to feed a multitude, bringing life and salvation to His brothers.

Jesus has gone into the grave, a grave with our name on it. He went in, and He came out, bringing life to all who believe It’s very straight forward. If you want to live, look to Jesus.

What the world cannot do is walk by the death of Jesus on the cross and shrug.

And those who passed by derided Him, wagging their heads. (Matthew 27:39)

The world either mocks in futile rebellion or it looks and says, “Surely this man is the Son of God.”

Growing Old
Jesus, Meek but not Weak
Poured out Like Wine
Jesus, Thy Kingdom Come

Rachel Levine, a man who wants others to address him as a woman has