Hide Search
You are here: Home / The Life and Times of Jesus / Jesus, A Victory Tour
Reading Time: 3 minutes

Jesus, having won a definitive victory over Satan during His time of temptation, now begins a victory tour of Galilee, proclaiming release for those under Satan’s rule (Luke 4:16-21). Here, in the synagogue, Jesus quotes from Isaiah 61, who in his day was prophesying to a people in captivity in Babylon.

The Spirit of the Lord is upon me,
because he has anointed me
to proclaim good news to the poor.
He has sent me to proclaim liberty to the captives
and recovering of sight to the blind,
to set at liberty those who are oppressed,
to proclaim the year of the Lord’s favour. (Luke 4:18-19)

The Year of Jubilee (The Year of the Lord’s Favour) took place every 50th year. It was one of the many feasts that God gave Israel when He delivered them from slavery in Egypt. Isaiah took that feast and applied it to Israel’s captivity in Babylon.

Israel went into captivity for as many years as she had broken her Sabbaths (2 Chronicles 36:21). Isaiah draws on the imagery of the Jubilee law to announce Israel’s restoration and release from their slavery in Babylon.

Now Jesus comes, and He applies it to Himself with the astonishing words, “Today, this scripture is fulfilled in your hearing..” (Luke 4:21)

The Jubilee was given by God in order to keep Israel free and dealt with three major areas of social life. Rest, Poverty and Property. 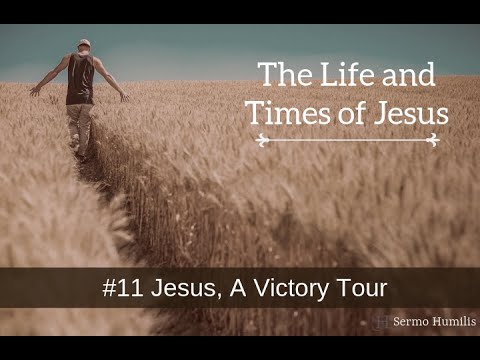 All of the Jubilee laws took place during a year-long Sabbath. During this “Mega Sabbath” Israel was commanded to stop the work of planting and harvesting and, by faith, entrust themselves to God’s provision.

The Sabbath would also give rest to the land and allow rejuvenation of Man, Land, and Beast. It was a blessing and a sign of God’s love for His people.

It’s important to note that God did not superimpose His law on creation. God is the Law: God is the Gospel and both law and gospel are woven into creation in such a way that ignoring these realities always carries its own penalty (Romans 1:27).

An example in recent history is Russia under Stalinism. In an effort to eradicate any semblance of God, Stalin exchanged the created order of a 7-day work and rest week for a 10 day week. Unsurprisingly, productivity crumbled and the economy collapsed.

Jesus fulfils the Jubilee by taking upon Himself the curse and enabling mankind to enter into a new rest. A refusal to rest, therefore, would imply that you are still living under the curse.

The Year of Jubilee was also “Good News to the Poor.” It meant release from debts that kept families locked in a cycle of poverty. Those who had sold themselves to servitude could now free themselves or else another was called upon to redeem his neighbour.

The captives in this verse are pictured as prisoners of war who are being held at spear point. The jubilee stopped tyrants and oppressors in their tracks and brought freedom to those in debt.

It pointed to our deliverance from slavery to the Kingdom of darkness. But, in order to liberate these prisoners, someone had to open the gate.

Jesus’ prior victory over Satan in the wilderness sets up the conditions for Him to lay hold of the keys. And so, to willingly be enslaved and indebted by this worlds goods is to chain yourself to the bars of an open cell.

God owns all the land and grants the right to stewardship in accordance with His laws. When these laws are ignored the result will always be theft and oppression (as was the case with Naboth and Ahab in 1 Kings 21).

The Jubilee meant the restoration of the land to its God-given trustees. Every 50th-year land that had been lost or sold to pay debts was restored. These property laws pointed to the inheritance Christ would claim and distribute among His people.

Just as oppressive labour, toil, grief and debt are overcome through the gospel, so too, the gospel restores to man the inheritance which Satan had swiped. The earth is handed back to Christ who distributes it among the meek (Matthew 5:5).

So, there you have the Jubilee.

Mankind suffers oppression because he has rebelled from the law of God woven into creation. The solution is the godly government that comes through Christ in the gospel. In other words, your inheritance, your security on earth, will either come from Christ or it won’t come at all.

You can understand then, the astonishment of the people, when Jesus sits down and calmly says, “Today this scripture is fulfilled…”

You can also understand why Jesus can describe His coming as very good news.

The Jubilee delivers us from endless toil, slavery and oppression and frees us to enjoy the rest of a redeemed people. It is a gift where every debt but love is cancelled.

Jesus, Fear not Little Flock
Jesus, Tradition
Jesus, Clean the Cup
Jesus, What Money is For

Two thousand years ago a group of men walked into Jerusalem and asked,

Mourning and grief over loss are universal experiences. And even