Hide Search
You are here: Home / The Life and Times of Jesus / Jesus, to the Ends of the Earth
Reading Time: 3 minutes

The Jubilee laws given to God’s people were designed to cut short and dismantle the development of an ungodly culture from forming among God’s people. They achieved this by releasing those who might have otherwise remained indebted, impoverished, enslaved or oppressed.

But for what purpose? Once you had paid off your debts and obtained your freedom, then what?

Many people see Christianity as debt payment and nothing else. Jesus is little more than a heavenly financial advisor who is there to help you clear some debts.

But the Gospel calls us forward. Having been released each Jubilee, Israel was commissioned to build, expand godly culture and multiply. The Jubilee was the backdrop needed to prepare for that godly enterprise.

And so throughout Luke, there is a constant reference to what Jesus is doing on the Sabbath – His Jubilee work of release and renewal; bringing down and building up.

In Luke 4:22-30, the people marvel at His words. Jesus responds by announcing that His Jubilee mission, like that of Elijah and Elisha, is going to be global (Luke 4:25-27).

What Elijah and Elisha did in part was to shame unfaithful Israel. Their work among the nations was not something many Jews would rejoice in.

And so, the fickle crowd who don’t care much for global mission, respond by trying to throw Him off a cliff (Luke 4:29).

The Jews longed for God to jump into their circumstances but they were not overly interested in what God had in mind for the nations.

The church wrestles with a similar temptation in response to the nature of Jesus’ mission. Some see the work of God as a cool summer zephyr playing among the leaves. They miss or avoid the fact that Jesus came to turn the world upside down and declare His rule over every last atom.

May He have dominion from sea to sea, and from the River to the ends of the earth! (Psalm 72:8)

Some of us are okay with Jesus soothing our feelings and tinkering with our heart, but we get nervous about the idea of letting Him loose on the really big stuff—like the whole earth or even a whole country. 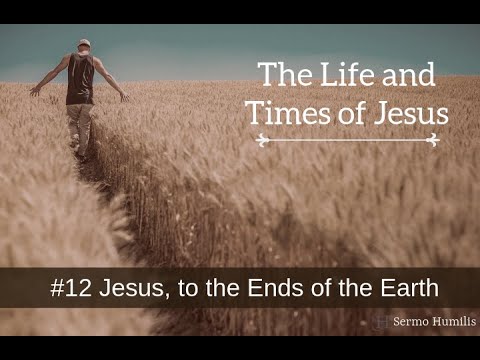 This is why Jesus’ confrontation with the demonic world and the healing of Peter’s mum in the next section is so important (Luke 4:31-39).

Having bound the strong man during His temptation in the wilderness, Jesus is now plundering the house and setting captives free spiritually and physically.

The Jubilee means dismantling the spiritual kingdoms that enslave us and it also means directly addressing the physical actions that arise from our sinful nature.

Some Christians have what we might call a “gnostic tendency”. That is, they see Jesus as some spiritual healer, having little to do with the material world.

By healing Peter’s mum, Jesus is saying that His mission is not only global, not only spiritual, but His mission has direct consequences for the physical, created world.

God turns up in human history as a new Elijah, bringing judgement on a wicked ruler and ridding the land of its demons, it’s sickness and its false prophets. He is the new Elisha, crossing the Jordan and entering the land in order to throw down that woman Jezebel.

This is what fulfilling the Jubilee looks like on the ground. This is what it means to bring true Sabbath rest.

Our Labour of Love

So then, what does it mean for us, the church, to enter into this Sabbath rest with Jesus?

First, it doesn’t mean we don’t labour. It isn’t about being idle. It means our labour is transformed. By faith in the gospel, we no longer labour to be approved by men or strive to maintain our own fragile little kingdoms.

To enter Sabbath rest means to be about the business of dismantling a kingdom, starting with our own. We labour to mortify our own piggy hearts. We labour to pluck lambs from the mouths of wolves: By taking aim at the wolves, that is, and not at the lambs.

Just as God has cancelled my debts and welcomed me, so I am to welcome my neighbour. Just as God stopped me in my tracks and put to death my sin, so I am to point others to Jesus as the only remedy for their sin.

And from there we begin the work of planting and building together.

Just as the purpose of education is not to get a job, but to walk with

Sunday is typically a day of rest for the church. We have several rest

Sometimes, Jesus stood toe-to-toe with those who opposed Him.