Hide Search
You are here: Home / The Life and Times of Jesus / Jesus, Repentance or Rage
Reading Time: 3 minutes

It was the feast of dedication (Hanukkah) and Jesus was walking around the temple. The people were asking, “If you are the Christ, tell us plainly” (John 10:22). Jesus replied that He had told them and that the works He had done in His Father’s name were the evidence, but they didn’t believe.

He then issues the stunning statement, “But you do not believe because you are not part of My flock”,

Jesus is the Good Shepherd. His sheep hear His voice and follow. He gives them eternal life and no one can snatch them out of His hand.

And in case that wasn’t reassurance enough, Jesus goes on to say that His sheep are in the even greater hands of His Father and that no one can snatch them out of His hand either (John 10:29).

What follows is a heated exchange that almost gets Jesus killed.

God’s people have a tendency to find themselves in controversy. And with statements like this from their Lord, it’s no wonder. Truths like this can quickly turn the town square into a riot. And that’s what happens here. The Jews promptly pick up stones in order to kill Jesus right there on the spot.

Contradicting the agreed public narrative can get you killed. And, while we are to seek the peace of our town, it is not peace at any cost. The Christian life is to be grace and truth at all costs.

Alas, some prefer tea and biscuits and an ecumenical barn dance and are always willing to move the line in the sand a little further down the beach. They are also willing to throw things at you if you break ranks by making noises about Jesus being Lord over marriage, or science, or school education.

As Christians walking in the footsteps of grace and truth we’re going to say and do things that others do not like. We’ll be speaking beautiful things, true things, saving things, but there’ll be people who stop their ears and beat their chests and start calling for bigger rocks.

Some will repent. Others will rage. 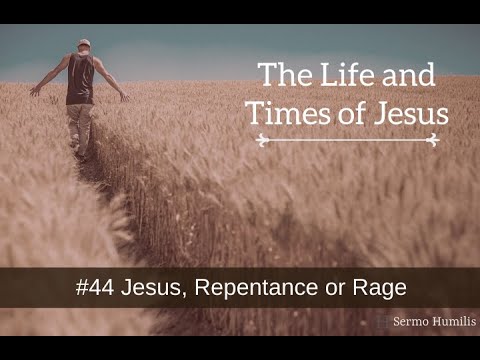 We are going to be accused of being divisive. But truth does not cause a division. Falsehood causes a division. Truth merely exposes the lie. And so Paul writes,

I appeal to you, brothers, to watch out for those who cause divisions and create obstacles contrary to the doctrine that you have been taught; avoid them. (Romans 16:17)

We are never to seek a controversy. But neither should we shrink from declaring the whole counsel of God.

Jesus said that He and the Father were one. He said it because it was true. They hated Him because He said what they were wanting to deny.

But many did and as Jesus withdrew from the crowd many followed Him down to the riverside.

There are sheep out there and Jesus has one interest:  Finding them and keeping them. It is our joy to follow Him in this. To find sheep, point them to Jesus, and then to walk alongside them as they find their feet in His kingdom.

You and I share in the glorious task of finding sheep and bringing them in under the care of Chief Shepherd.

Throughout this heated exchange, Jesus is talking directly to those ready to stone Him. But, once again it’s the onlooker who is benefiting from all of this. There are sheep in the wings who would soon be followers because of the words He spoke.

They were sheep looking for their Shepherd and now they had found Him.

Okay, so, maybe you’re caught up in some controversy. Maybe you are wrestling with those who oppose the gospel. Maybe they’ll never believe. Who knows? But maybe there are also some sheep in the crowd. Maybe they aren’t quite there yet. Don’t write them off along with your accusers.

John the Baptist is our example here, which is probably why John gets a mention by the people now following Jesus.

John did no sign, but everything he said about this man was true (John 10:41)

There is your cue. How do you lead the sheep to Jesus? You testify of Jesus. They will hear, some slowly, some quickly. And then they will come in – every last one of them.

Jesus, The Harvest
Jesus, Words that Matter
Jesus, Who's Out, Who's In
Jesus, Justice

Our daughters are not free agents. They have a man in their life, and

Jesus' Sabbath healings in John 5 result in persecution. But this does

Believers are a congregation of God's people. They come from many