Hide Search
You are here: Home / The Life and Times of Jesus / Jesus, Binding the Strongman
Reading Time: 3 minutes

The coming of Jesus into the world was more than a set-up for some future victory. Though for us the victory is yet to be fully experienced, the decisive demolition has been done. The prisoners of war have been set free and are now heading home for the parade.

You and I are freer than we sometimes feel and winning in ways we do not always comprehend.

Jesus’ ministry of healing on the Sabbath and delivering the blind and mute from demon possession in Matthew 12 was the evidence that He had stormed the gates and was currently plundering the enemies house. And for that to happen, which it clearly was, Jesus said the strongman (that is, the Devil) must first be bound (Matthew 12:29), which he clearly must have been.

His mercy provokes a strong reaction from the Pharisees and they conspire to destroy Him (Matthew 12:14). They also pin Jesus’ power to liberate people from demonic oppression on demonic power. Jesus thought that was nonsense.

And if I drive out demons by Beelzebul, by whom do your sons drive them out? So then, they will be your judges (Matthew 12:25-27)

According to Matthew, the Lord’s power to heal and deliver was evidence of the Spirit that God had placed on Him. Quoting Isaiah 42, Matthew writes,

Behold, My Servant whom I have chosen, My Beloved with whom My soul is well pleased. I will put My Spirit upon Him, and He will proclaim justice to the Gentiles (Matthew 12:18)

The prophecy of Isaiah goes on to say that this turn of events marks a victory, not only for the believing Jew but also for the Gentiles. A way has now been made for both to enter the kingdom of God (cf. Revelation 20:1-3).

Satan has had his power to deceive the nations and block the way of salvation seriously curtailed. 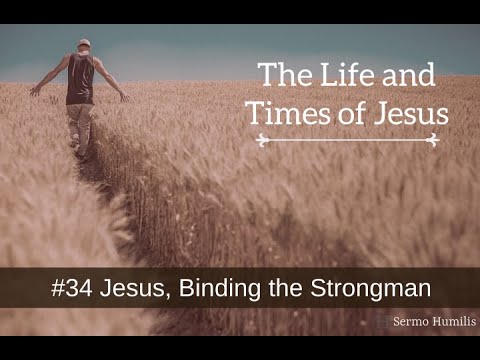 This means, among other things, that we are not waiting for victory. We are not sweating it out down here on earth hoping that Jesus will come out on top in heaven. And Jesus is not in heaven wringing His hands in a cold sweat hoping to defeat the devil.

The decisive battle is not in the future but in the past. Likewise, the victory is not something He is hoping to gain through the passage of time. The victory is already His. The front lines have been breached and He is now running off with the spoils of war.

Satans power to deceive and prevent us from entering into the kingdom is shattered. The kingdom of the world has become the kingdom of our Lord (Revelation 11:15) and we are now invited to join Jesus as He plunders souls for God in Heaven (Matthew 28:18).

Yes, we still have our battles to face, but the victory has already been secured by Jesus and what we see today is the progressive result.

Jesus is not locked in mortal combat with the Devil, warring over the souls of men. He is enthroned in heaven, plundering the spoils and treasures of war.

And you and I are that treasure.

We tend to have a petty view of sin. Not that we think too little of

In John 13:1-35 Jesus shows us that His love for His disciples will be