Hide Search
You are here: Home / The Life and Times of Jesus / Jesus, Women Who Serve
Reading Time: 3 minutes

Until now, Jesus has used Capernaum as a base for ministry. He has headed out from there on short stints and then returned. Chapter 8 in Luke marks a change in the way Jesus has been doing ministry among the people.

At this point, He leaves Capernaum and begins moving from town to town. Wandering.

His teaching also shifts from answering questions and proclaiming the fulfilment of the Kingdom according to the Old Testament prophecies to teaching with parables.

The reason for the parables is given in verse 10.

To you it has been given to know the secrets of the kingdom of God, but for others they are in parables, so that ‘seeing they may not see, and hearing they may not understand.’ (Luke 8:10)

This is a quote from Isaiah 6:9-11 in which God commissions Isaiah to preach desolation.

The principle is, “Because they will not hear, they shall not hear” (Luke 8:8). Rather than be attracted by the proclamation of the Good News, people were now being repelled by it.

Everyone is given the same message, but not all will heed, meditate on it or let it sink deep into the heart.

There is a simple but important lesson here. Every time you hear the Good News you are either responding with increasing hardness of heart or tenderness of spirit.

There is no neutrality in this world.

Every Sunday you walk out of church a little harder or a little more tender to the things of God.

Every time you are confronted with a new understanding of Jesus, a deeper insight into the way of the gospel, you are either moving closer to maturity in your faith or you are slipping away. 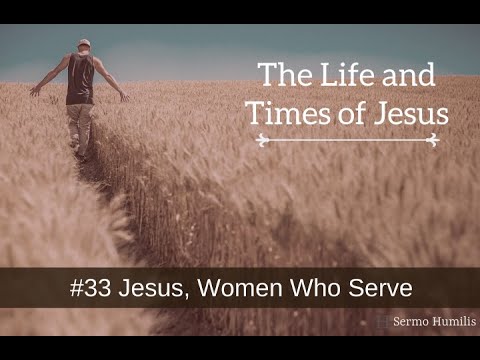 Among those who had come to know Jesus and had begun travelling with Him when He left Capernaum with His Disciples were a group of women. Three of them get a mention here: Mary, Susannah and Joanna.

And the twelve were with him, and also some women who had been healed of evil spirits and infirmities: Mary, called Magdalene, from whom seven demons had gone out, and Joanna, the wife of Chuza, Herod’s household manager, and Susanna, and many others, who provided for them out of their means (Luke 8:1-3)

These women had met Jesus, been healed or delivered by Jesus and had come to follow Jesus more and more closely than the day before. Now, they were going on the road with Him.

Women hold a central place in biblical history. To a woman, the promise of salvation was made in Genesis. Women are noted as the instrument through which God raised up godly kings (2 Chronicles 26:3-4; 2 Kings 14:1-3, etc).

Women were the last to see Jesus alive and first to seem Him resurrected. It is also noteworthy that none acted against Him.

Here in Luke, we see that among the close followers of Jesus, we have a small band of women, our first deacons, providing for the material needs of Jesus and the Apostles.

Never let anyone tell you that women are shunned or oppressed on account of the Christian faith. It’s people who shun and oppress people. The gospel of Jesus does nothing but liberate and empower all those who live according to the gospel in order to serve in the gospel.

The Rabbi’s, by contrast, refused to teach the women (though they were happy to take from them. cf. Luke 20:47).

Look around your own church next Sunday. You will find very few women sitting on their hands and doing nothing. Woman in church, from the eldest to the youngest are typically engaged in Christian ministry.

The ministry of the women mentioned in Luke’s gospel, along with many others, was a significant contribution to the ministry of Jesus. Jesus never used His Divinity to provide for Himself. Though God, Jesus became a man and lived as a man.

His ministry of seeking and saving the lost was sustained by earthly means often provided by women and sets the pattern for how we are to provide ministry to one another as we seek the lost for Christ.

To the untrained eye, much of what we do in our Christian faith appears to be rather mundane. Buttering scones, dropping someone off at the doctor’s, mowing a lawn.

I suppose that buttering scones would be mundane and rather dull if you were doing it for yourself or for the applause of mere men. But it’s not mundane and certainly not insignificant when we are doing it unto Jesus for the sake of others (1 Peter 4:7-11).

New years' are for resurrections. They are an opportunity to start

John, a cousin of Jesus, turned up on the scene baptising the people

No hugs, no kisses, no handshakes. That's the media mantra currently