Hide Search
You are here: Home / Jesus Through all of Life / #15 Jesus and Government
Reading Time: 5 minutes

The Early Church had plenty of conflicts. There was conflict within its own ranks and with Rome. As believers who want to adorn our lives with the gospel, these conflicts are often complicated. But God has given His word to help us navigate these conflicts and teach us how we ought to function in this world with Jesus as Lord.

These three governments were established by God directly, and all three are grounded in the underlying reality of the self-government of every man established with Adam by God in the Garden of Eden.

That civic authority is responsible for executing justice by punishing the wicked and rewarding the good. That ministry may also include defending a population from a visible threat.

One of the things that belong to God is the decision about what belongs to Caesar. Civil governments are God’s servants or deacons. Those public servants who leave aside God’s laws and create their own, who grasp at authority that belongs to others or who encourage others to break God’s laws and punish those who do good by obeying God’s law, are still deacons of God. They are just not faithful deacons.

Both Peter and Paul commended obedience and honour to the state (1 Peter 2:13-14, Romans 13:1-5). They also acknowledged that while we are to recognise civil governments’ God-defined roles and honour them in it, if they step outside of their lane and assume authority they do not have, they may very well be disobeyed.

And so, we see both men disobeying the authorities, involved in jailbreaks (Acts 12), evading arrest (Acts 9:23), and afterwards martyred for being seditious and disobedient rebels of the state.

We could also add to that list of rebels Gideon who committed tax evasion ( Judges 6:11), the Hebrew midwives (Exodus 1:17), Daniel, and Obadiah, a servant in King Ahab’s government, who hid a hundred prophets of God in two caves (1 Kings 18:4), in direct disobedience to the Kings’ edict.

Not to mention 300 years of disobedience to Rome where Christianity was illegal altogether.

The family is responsible under God for the ministry of health, education, and welfare.

Families are given the responsibility for the health, feeding, clothing and housing of their members (Proverbs 31:15-21, 1 Timothy 5:3-4). They are also responsible for the primary education of their children (Ephesians 6:4).

That education does not exclude a family’s right to bring in wise instruction from outside the family for the purposes of trade, labour and academic study. But the family does not thereby relinquish its accountability. Rather, they are increasing it.

What might it look like in our own day when Caesar has taken up many of these responsibilities for himself?

Well, suppose the government decided to get into the health business. Just suppose! Suppose they decided to abolish private dental care and set up their own publicly-funded “Ministry of Teeth and Gums”.

Now, suppose you come home from work one day to find your four-year-old with a cracking toothache. You ring the “MTG” and they tell you they can’t fit your child in for another two months.

Now, it so happens that your neighbour is a retired dentist and is making a nice bit of money on the dental black market by helping out kids like yours.

What do you do? Well, who is accountable for your child’s well-being? Who is ordained to oversee your child’s welfare? Who is out of order here? Who has over-stepped the ministry entrusted to them by God? Which government is in the wrong lane? 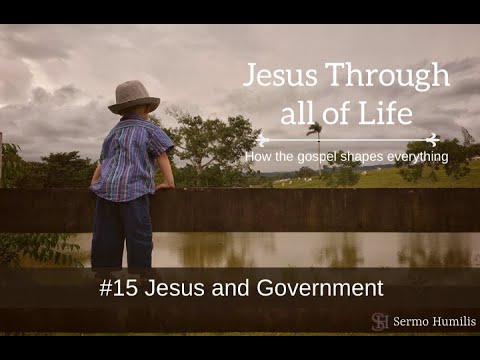 Sometimes, doing what constitutes love in the eyes of God is going to be labelled as rebellion and even evil by those in power (1 Kings 18:17). I hope that what you would do is take your child by the hand and lead him to the friendly chap next door, humming Kumbaya as you go.

The Church is responsible for the ministry of Word and Sacrament.

The government of the church was established by God in Christ whose appointed servants are to administer the Word of Grace and its sacraments for the building up of the body of Christ (Ephesians 4:11-12).

While the role of caring for family members is an immediate responsibility of the family, this does not deny the work of the church in providing for those who slip through the family net – widows and orphans in particular (1 Timothy 5:3-16).

Given these God-appointed governments and their respective jurisdictions, it would seem that anything that leads the church or her ministers to ignore, set aside or diminish her duty to God opens the door to compromise and disloyalty to Christ.

The primary function of the church is not to execute the will of the state, much less the imposition of man-made religion on the flock (Colossians 2:21-23).

We cannot serve two masters and we are not here to win the applause or approval of men.

One of the major issues in the early days of the church and its families was how to deal with the fact that civil government had gone well beyond their God-appointed ministry.

The edict of Rome was,

Salvation is to be found in no other save Augustus and there is no other name given to man in which they can be saved.

It was a Political Statement. To the Christian, Jew and Roman, salvation was a total concept. A Saviour had dominion and authority over every realm of life.

And so, not only was the state Lord, it must, as Diocletian said, also be a father, provider.

And so, when the church began to declare the Lordship and salvation of Jesus Christ, it found itself on course for a collision with the state.

So it was then and so it is today.

During the early days of the church, Rome said of the believers, “Their vices trouble us, but their virtues threaten us even more.”

In Luke 14:26-35 Jesus turns to the multitude of weary, shepherdless

Man, being made in the image of God, cannot live without a mediator.